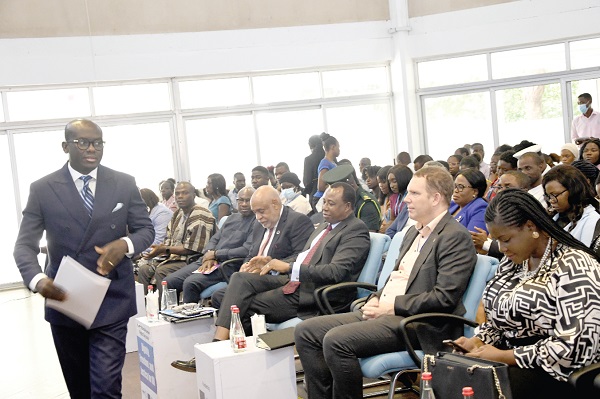 Godfred Yeboah Dame (left), Minister of Justice and Attorney-General, on his way to mount the podium to deliver the keynote address at the event Picture: EBOW HANSON
30.5k Shares

The Attorney-General and Minister of Justice, Godfred Yeboah Dame, has said that the passage of an Alternative Sentencing Bill was necessary if the country was to realise its goal of reducing congestion in prisons.

That, he said, was because the UN Office on Drugs and Crime (UNODC) had identified overcrowding as the root cause of many human rights violations in almost all prison systems in the world.

“I have reviewed a draft Community Sentencing Bill that my office drafted. The bill is going through the process of stakeholder consultations spearheaded by the Ministry of the Interior.

“I am hopeful that this bill will soon be laid before Parliament and will be treated as priority legislation by the House,” the minister said.

Mr Dame was speaking at a public forum to commemorate the 75th International Human Rights Day in Accra yesterday on the theme: “The state of human rights in Ghana; Progress, challenges and the way forward.”

The day is celebrated on December 10 annually around the world in fulfilment of the UN General Assembly's adoption and proclamation of Universal Declaration of Human Rights (UDHR) in 1948.

The event was organised by the Media Foundation for West Africa (MFWA), and sponsored by the EU, the UN and the Embassy of the Czech Republic.

The minister said achieving a change in the approach to punishment for crime from custodial sentencing to restorative justice and re-integration, except in circumstances clearly warranted, called for the orientation of the judiciary, lawyers and the general public.

“It is for this reason that I pursued the amendment of the Criminal and Other Offences (Procedure) Act to formally introduce plea bargaining in the criminal jurisprudence of this country through the enactment of Act 1079, assented to by the President on July, 22, 2022,” he said.

According to Mr Dame, the country’s credentials as a strong democratic nation with a formidable reputation in the protection of fundamental human rights and freedoms of all persons with a highly independent and fearless judiciary, remained unshaken.

The Commissioner of the Commission on Human Rights and Administrative Justice (CHRAJ), Joseph Whittal, said the country had been inconsistent in meeting recommendations it had accepted to perform with its peers at Universal Periodic Reviews (UPR) at the Human Rights Council and other treaty bodies.

Similarly, he described the country’s submission of periodic reports to the African Commission on Human and People’s Rights pursuant to the African Union Charter as not the best.

“Ghana is considered by reputable governance research foundations as doing well in governance, but more needs to be done by the state,” Mr Whittal added.

He further called for the adoption of a human rights-based approach to development to protect the poor, vulnerable and marginalised in the country.

“As a commission, we remain committed to our mandate in the promotion and protection of human rights, and we will do everything possible within the remit of the law to ensure true respect for the rights of all,” he added.

The Executive Director of MFWA, Sulemana Braimah, said the country had over the years made significant progress on human rights although there were still some challenges.

“This requires us to plan, strategise and execute actions that will help us make progress; the reason we are here to focus on taking stock of our human rights situation as a country,” he said.