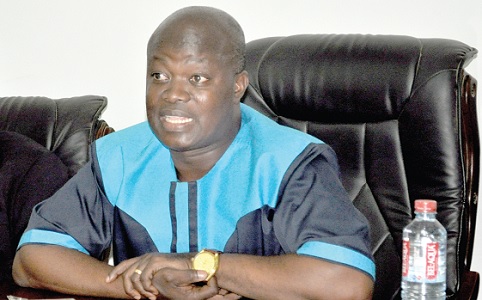 The Chief Executive Officer (CEO) of the National Ambulance Service (NAS), Professor Ahmed Nuhu Zakariah, has admitted to the Special Committee of Parliament investigating the death of a pregnant woman in a national ambulance that the crew had to demand money for fuel due to the inadequate budgetary allocation from the government.

He said the budgetary allocation from the government was often used for emergency situations, an unapproved practice that had made it “a normal practice” for the ambulance crew to demand fuel support from families of patients.

“At the time of this woman’s emergency situation, the crew had exhausted their strategic fuel stock and what they had would have been inadequate to transport her from Fijai to Accra,” he said.

Testifying before the six-member committee in Parliament yesterday, Prof. Zakaria said: “It is because of the limited finances that our crew charge patients for the services they provide. The ideal is for the ambulance not to charge, but due to financial constraints, the crew demand money for fuel for long distances.”

Per the National Ambulance Service Act, 2020 (Act 1041), the NAS is barred from charging the public for the services it provides, as it enjoys a percentage of funds accruing to the National Insurance Commission, the National Health Insurance Authority (NHIA), internally generated funds, among others.

Augustina Awortwe, 31, lost her life in the ambulance after undergoing a Caesarean section at the Holy Child Catholic Hospital in Fijai about 8.20 p.m. on January 4, 2022.

Prof. Zakaria said each year, the NHIA allocated GH₵10 million to the service.

He said even if the service were to use all the allocation on fuel, it would not be sufficient for the 297 ambulance stations across the country.

He explained that the fuel capacity of each ambulance was 100 litres, which required that the ambulance that transported the victim required at least GH₵800 worth of fuel, as a litre of fuel cost GH₵8 at the time the incident took place.

“So, Mr Chairman, what the stations do is keep some of the fuel for dying emergencies and they allow patients to support as and when necessary,” he said.

Realistically, Prof. Zakaria said, it would not be possible for the service to provide “free distance travels without asking patients’ families for support”.

When the Chairman of the committee, Dr Nana Ayew Afriye, asked him if the GHc10 million was all the support the NAS received from the government, Prof. Zakaria said the service also received GH₵6 million support from the SDI for fuel.

He pointed out that given the nature of emergency services the NAS provided, there should be a system of sustainability in order for the service to provide services throughout the year.

When the Ranking Member, Kwabena Akandoh, quizzed him if the ambulance had fuel as of the time the crew moved from the dispatch centre to the Holy Child Catholic Hospital, Prof. Zakaria said there were only 25 litres of fuel in the vehicle.

He said the crew had moved with the understanding that there was the possibility of the hospital or the family supporting with fuel.