It can be very stressful to have a relative admitted to a health facility. It gets even more depressing when you have to grapple with taking care of the needs of that sick relative under unfriendly conditions while facing financial constraints.

The situation gets worse when there is no decent accommodation for the caretaker while he or she is on a 24-hour standby to perform duties for the sick relative.

Such is the situation at most of our major health institutions in the country where relatives of patients on admission become ‘squatters’ because they cannot afford to shuttle between the hospital and their homes.

A team from the Daily Graphic, on September 22, 2016, visited the 37 Military Hospital between 9 p.m. and 10 p.m. to find out how caretakers-turned-squatters spent the night.

Benches, mosquito nets and pieces of cloth served as beds for both men and women whose relatives were on admission at the hospital.

Some women who spent the night under a temporary shed erected by the hospital authorities used their handbags as pillows. It was simply a scene of “survival of the fittest”, as men and women squeezed themselves into place.

The temporary shed, which has been put up on a half plot of land situated between the Medical Emergency Ward and the Simango Ward of the hospital, serves as a safe haven for the ‘squatters’.

It has neither toilet nor bath facilities and, according to the hospital authorities, it was put up to serve as a waiting area and not as a sleeping place for caretakers.

Asked how they managed to have their bath and attend to the call of nature, those lodging at the shed told the Daily Graphic that the hospital had been magnanimous in allowing them to use its facilities.

Some said they had, for the past two months, been sleeping under the shed, which has no windows but filled with benches.

Sad episodes of some people leaving in tears after spending several weeks in the shed were narrated — their family members eventually died.

At the time of the visit, some of the ‘squatters’ were asleep, while others were chatting.

It is important to note that parents and guardians of young patients on admission are permitted to spend the night in the wards with their young ones.

Mosquito coils were lit to ward off mosquitoes, which still hovered around the shed.

Running errands such as buying drugs and toiletries, sending samples to laboratories, collecting the results, cleaning family members, including changing diapers, were some of the reasons given by the squatters as necessitating their continued presence at the shed.

They also said paying for laboratory services, medication, sanitation items and others was a serious financial drain on them, to which they could not add the burden of transportation cost to and from the hospital every day.

Asked if they had any security concerns, they answered in the negative but conceded that it was arduous coping with the harsh weather conditions.

Relatives sleeping in the open with their belongings beside them

Agnes Wusah, from Shai Hills in the Greater Accra Region, said her husband was on admission at the hospital after losing an arm in a motor accident.

She told the Daily Graphic that she was into farming but her professional driver husband, who had been on admission for four weeks, was the breadwinner.

“Life is so hard it is practically impossible for me to travel from Shai Hills to the 37 Military Hospital every day to run the needed errands at the hospital,” she said.

A 70-year-old resident of Nsawam, Madam Elizabeth Ahorsu, narrated how she had coped for 11 days in the open because her 40-year-old daughter was on admission.

She said it was challenging living under such conditions but she did not have enough money to be shuttling between her home in Nsawam and the hospital.

Mama Gharli, a 42-year-old trader, had lived in the shed for five weeks, running errands every day and hoping her husband would get well and be discharged.

Speaking Twi, Madam Gharli said besides finding it extremely uncomfortable to sleep under the shed, she was constantly worried about her health.

“I sometimes wonder if I will not end up sick after my husband had been discharged, but under the circumstance, I do not have a choice,” she said.

A male squatter, Salifu Tanko, said he was putting up under the shed in wait for his sibling who had been on admission for eight weeks.

His reasons for spending the night at the shed were not different from those of the others. 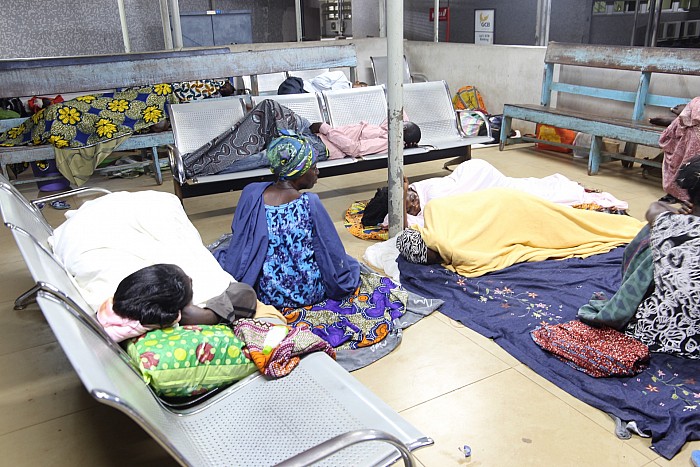 In an interview, the Commanding Officer of the 37 Military Hospital, Brigadier General E.C. Saka Jnr, explained that the temporary shed was built on humanitarian grounds to serve as a waiting area for family members of patients on admission.

“In the past, they used to be scattered around the hospital, thereby disrupting the work of healthcare personnel. As a result, the hospital decided to build the shed for them,” he said.

Brig. Gen. Saka Jnr said it was illegal for the squatters to spend several nights, weeks and months at the shed but added: “We cannot sack them.”

He said the situation was worrying, for which reason the authorities had earmarked a parcel of land to be developed into affordable accommodation for family members of patients on admission who would have to hang around because of various reasons.

He said the hospital was considering a design for a four-storey building that would feature a mart, automated teller machines (ATMs) and restaurants at the ground floor.

The next floor could be the dormitory type to be provided at an affordable rate, to be followed by a room with two beds with shared facilities and then VIP rooms on the top floor, he added.

“We are looking for investors to take up the project on terms mutually beneficial to the hospital and the investors,” Brig. Gen. Saka said.

“The project can be on a build, operate and transfer (BOT) basis or other terms mutually beneficial to the hospital and the investors,” he added.

Giving her perspectives on the situation, a former social worker in the United Kingdom (UK), Ms Priscilla Santuo-Ocrah, described the narratives by the squatters as touching.

She said in the UK the responsibility of hospitals to adult patients on admission was to cater for their medical needs, including the provision of medicine and care by nurses and auxiliary nurses.

Therefore, family members visited their sick relatives to provide emotional support and a few other things for patients, adding that if it happened that for reasons ascertained by the health personnel a family member needed to stay overnight, the family member would be given accommodation.

Ms Santuo-Ocrah said such accommodation was supported by non-governmental organisations (NGO), members of the public and the government.