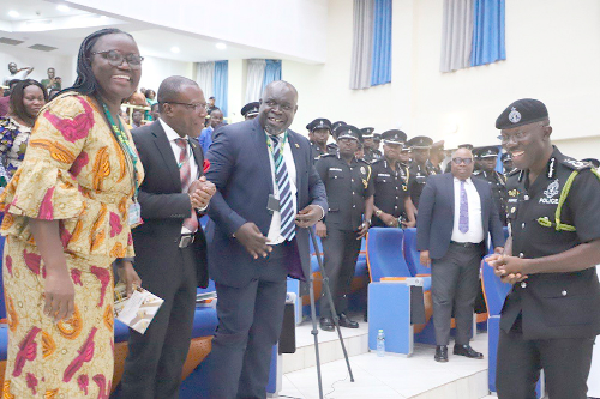 The Inspector General of Police (IGP), Dr George Akuffo Dampare, has said that the police are building a new image for the service, and rejected the tag of being the most corrupt institution in the country.

He said the service had commenced "a self-introspection exercise" to weed out bad lots to win back the trust, confidence and respect of the public.

Delivering a public lecture in Kumasi last Thursday, Dr Dampare said the service had never run away from the fact that there were a few corrupt and "bad guys among members of the force", but added that he would never accept the tag of the service being the most corrupt institution in the country.

"All those researches have a challenged methodology. But we will keep working at the things that over the years have been used against us and make us uncomfortable," the IGP said.

Dr Dampare was delivering the lecture on: “The changing face of policing in Ghana: Expectations and the role of the university community" at the Kwame Nkrumah University of Science and Technology (KNUST).

The Faculty of Social Sciences of KNUST organised the lecture as part of its thought leadership initiative.

Dr Dampare said the police service had mounted a strategic intervention policy "to turn around the corner" and build on the successes of its forebears.

The effort, he said, involved building a vigorous, pragmatic transformation and become the best institution in Ghana and a reference point to the rest of the world.

"We are doing everything humanly possible to transform the police service to a level that will be acceptable by all," he said.

The drive, according to the IGP, hinged on three main pillars of leadership-driven command and control culture, personnel development and welfare, and ensuring police professional standards and accountability.

In line with its reward, recognition and punishment system, the IGP urged the police to do what was right to have the full backing of the top hierarchy.

"But those who decide to do otherwise will be dealt with according to the law,” Dr Dampare warned.

The IGP said while working hard to make the police more friendly and visible in communities, the service had engaged a number of informants on commercial basis with a reward package ranging from GH¢1,000 to GH¢50,000.

Much as he reckoned that the number of informants were rising and could be a drain on their coffers, the IGP said it was the way to go to get the communities involved in weeding out miscreants from the societies.

"I have always maintained that policing is a shared responsibility, and it's time we all embraced it," he said.

He announced the establishment of a Police Emergency Medical Intervention Fund with a seed money of $1 million to cater for those who may be incapacitated or die in the line of duty.

Also, when a serving officer died on duty, a qualified son or a relative of the deceased officer would be recruited to replace the officer as part of the welfare and to motivate them.

All these, the IGP said, could only be achieved in a peaceful society.

He said the greatest inheritance the current police force could bequeath the next generation was peace and to build on the good work done by their forebears.

The over one hour lecture also zeroed in on more practical policing where new recruits go through about 75 per cent practical work to come out as "complete police officers".

Indeed, new recruits learn how to drive, swim, ride a bike, among other skills, to enhance their capabilities.

The IGP said in the future it should be possible to have a suspect and a complainant to engage police officials virtually without their physical presence at the station.

He announced a partnership with KNUST, especially the Engineering Department, to develop and implement tailor-driven research in fighting crime.

Already, the two institutions are working to build a security mindedness university community as part of the service's home-grown policy.

The police are to adopt both the proactive and reactive approaches in engaging the university community to stamp out crime.

The IGP suggested to the university to introduce a mandatory programme in security awareness, while urging the general public to take their personal security seriously.

The Vice-Chancellor of the KNUST, Prof. Rita Akosua Dickson, underscored the fact that quality policing had a direct bearing on the quality of life of the people.

Subsequently, she said the security of every society should be the collective responsibility of all.

"We must all contribute from every angle and make it work,” she said.