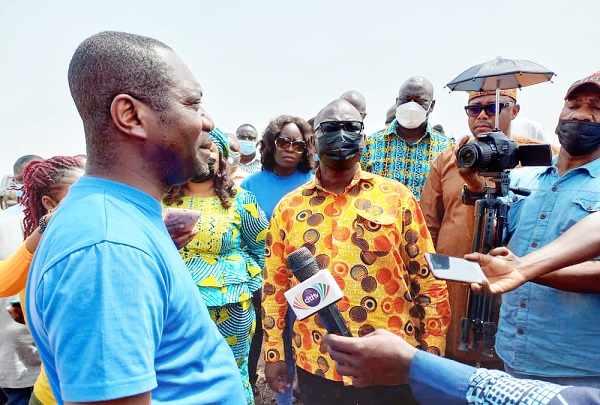 Mr Isaac Mensah (left), Head of Business Development at the State Housing Company, briefing Mr Francis Asenso-Boakye (middle), Minister of Works and Housing. On the right is one of the abandoned projects Follow @Graphicgh

The Minister of Works and Housing, Mr Francis Asenso-Boakye, has appealed to traditional authorities to help recover and protect all state lands that have been encroached upon by private developers.

He lamented the wanton encroachment of state lands meant for affordable housing and other projects and said the phenomenon, if not checked, could pose a threat to the future growth and development of the country.

"We need the assistance of traditional rulers to stop the encroachment so that we can use the lands for the purposes for which they were acquired because chiefs are the custodians of the area," he said.

Mr Asenso-Boakye made the call in Tamale yesterday when he inspected the Tamale Affordable Housing project and a number of projects to ascertain the state of the abandoned facilities as part of his two-day working visit to the Northern Region.

Accompanied by the Metropolitan Chief Executive for Tamale, Mr Sule Salifu, and some officials of the ministry, the minister also inspected the State Housing Estate, the Russian Bungalows and the housing projects of the Customs Division of the GRA and the Ghana Immigration Service, all in the metropolis.

The Tamale Affordable Housing project is among the five housing projects started between 2007 and 2008 but abandoned in 2009.

Currently, there are eight structures at various stages of completion.

In 2020, the Ministry of Works and Housing handed over the project to the State Housing Company (SHC) Limited to complete.

The land acquired for the project was about 261 acres, but due to encroachment by some private developers, it is now left with about 94 acres.

Already, three similar projects at Asokore-Mampong in Kumasi, and Kpong in Accra have been completed, leaving the Tamale and the Wa projects.

Mr Asenso-Boakye indicated that the government, through the Ministry of Works and Housing, had started working with the private sector to develop all affordable housing projects, with the government funding 20 per cent of the construction cost to make them affordable to low-income earners.

He said the project, when completed, would provide affordable accommodation for both private and public sector workers.

“The people of the Northern Region are looking up to the government to continue with this project and we will do everything possible to ensure that it is restarted as soon as possible,” he said.

He explained that the ministry was also engaging the various banks, so that individuals on government payroll could buy the houses, using their salaries as mortgage.

Conducting the team round the projects, the Head of Business Development at the SHC, Mr Isaac Mensah, said the project was handed over to the company in 2020, but due to land encroachment issues, work was yet to start.

"When we did our feasibility studies,we came to the realisation that the whole land was about 261 acres, but when we moved to site after the studies, we noticed we were left with about 94 acres.

“We are currently working with the chiefs and the Lands Commission to see how best we can stop the encroachment and commence work on the site," he said.