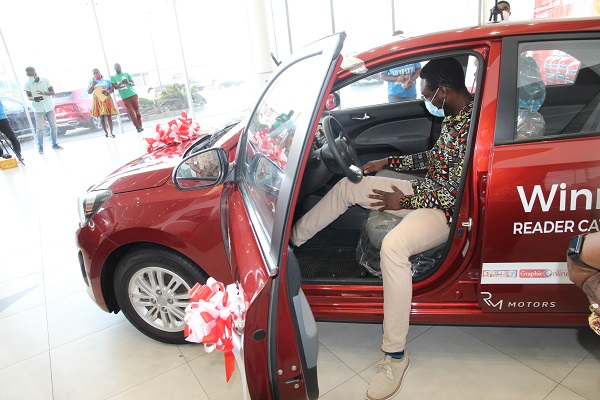 The Graphic Communications Group Limited (GCGL) last Friday presented the first KIA Pegas sedan vehicle in the [email protected] Loyalty promo to the winner, Mr Prince Hayford, 53, a businessman based in Kasoa in the Central Region.

At a presentation ceremony at the head office of Rana Motors in Accra, the lead sponsor of the promotion, which also attracted representatives from Lalafio.com., another sponsor of the promo, staff of the GCGL and the family of the winner, Mr Hayford could not hide his excitement at winning the ultimate, describing it as a ‘dream come true’.

He said it was an honour to have been picked as the winner of the first car and expressed appreciation to the GCGL and its partners.

He said as an ardent reader of the GCGL brands, particularly the Daily Graphic, he was thrilled that he won the first car and said he was looking forward to winning at least another car from the remaining three.

"I am very grateful to the GCGL and Rana Motors for organising this promo and I am happy to be the winner of the grand prize, a KIA Pegas car. Just as I did in the past and won prizes in similar promotions, I will continue to be in the promo and make sure I win the other three cars too," he said.

He encouraged others to participate in the promo, which he described as genuine, just like previous promos by the GCGL.

Mr Hayford, who had won prizes in similar promos organised in the past, said he always made a conscious effort to win anytime a promo was organised to reward readers.

“It may be luck, but I also make the conscious effort to win. I participate in promos with the aim of picking prizes.

“For this [email protected] Loyalty promo, I began the day the promo was activated and have been buying 20 copies of the Daily Graphic on a daily basis and do as the promo requires by cutting out the coupons and sending them to the GCGL Head Office,” he said.

He said he had been an avid reader of particularly the Daily Graphic since the early 1990s, noting that there were times in his life when he had to read “dead papers”, since he could not get the papers the very day they were published.

Prizes won by Mr Hayford include those from the Fathers Day and Mothers Day promos, as well as emerging as the ultimate winner in the Graphic Showbiz Valentine Promo.

He also won two tickets to travel to Brazil in 2014 with his wife under a promo organised by the Graphic Sports.

Mr Hayford described the presentation of the car as a good reward for being a loyal reader of GCGL brands.

“I think the group truly rewards its loyal readers, and I can attest to that,” he said.

In a short address, the Chief Operating Officer of Rana Motors, Mr Kassem Odaymat, said the company was proud to be associated with the GCGL and its partners to organise the promo.

He congratulated Mr Hayford on winning the grand prize, adding that “this is an assurance that your new dream starts today with the Kia Pegas”.

“The Pegas saloon car has a 1.4 litre engine capacity, it is stable and agile, has adjustable steering, a user-friendly console and advanced technology.

“In introducing the Kia Pegas onto the Ghanaian market, we considered a sensible sedan that is practical and fascinating — a car that is comfortable, roomy enough to allow you stretch, with considerable safety features and still comes at a mind-blowing price.

“With a five-year warranty or 100,000 kilometres and top-notch after-sales service, the Kia Pegas is a real budget car for fleet buyers, value-oriented first-timers and is that additional family support car,” he said.

While congratulating the winner, the Editor of the Daily Graphic, Mr Kobby Asmah, said the company would continue to reward its loyal customers as the leader in the media industry.

“It is important to note that Mr Hayford has won almost all GCGL promo prizes, including the Mothers Day and Fathers Day promos, Graphic Showbiz Valentines promo and the Graphic Sports promo,” he said.

The Sales and Circulation Manager of the GCGL, Mr Kwaku Tweneboah Ofosu, encouraged readers of the paper to continue to participate in the promo to win more prizes, including cars.

The [email protected] Loyalty promo is being organised as part of the GCGL’s 70th anniversary to reward active and loyal customers of the media giant.

Launched in October 2020, the promotion is in two categories — daily and monthly.

At the end of the 90 days of the promotion, two winners will each walk away with a KIA Pegas car from Rana Motors.

The first of the two grand draws was held last Friday, April 9, 2021, at the GCGL’s head office in Accra and was streamed live on Graphic.com.gh and on Facebook and YouTube @DailyGraphicGhana and @Graphicgh, respectively.

The winners were selected at random from the entries for the daily and monthly prizes before the grand draw, which is the quarterly prize — car.

Readers of any of the GCGL brands — the Daily Graphic, The Mirror, Graphic Sports, Graphic Showbiz, Graphic Business, Junior Graphic and Graphic Online (www.graphic.com.gh) — are rewarded daily, weekly and quarterly with prizes worth over GH¢1 million.