Group petitions President over felling of trees, plants at Parks and Gardens 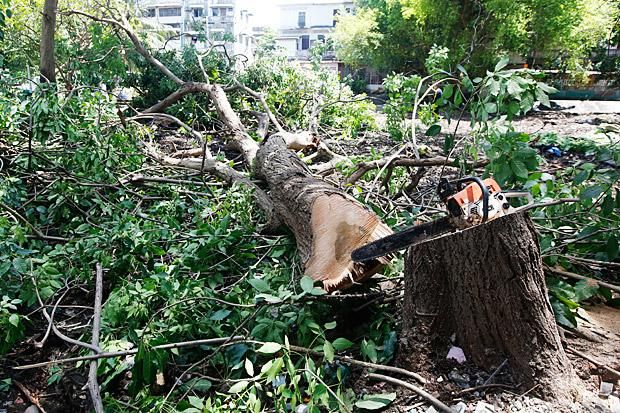 Environmental protection advocacy group, Eco-Conscious Citizens GH (ECC GH), has petitioned President Nana Addo Dankwa Akufo-Addo over the felling of over 100 trees and destruction of plants at the head office of the Department of Parks & Gardens at Cantonments in Accra.

According to the group, checks from the Environmental Protection Agency (EPA) showed that there were no permits covering the destruction exercise.

The Coordinator of the group, Ms Awula Serwah, who spoke to the Daily Graphic in an interview, described the action as “environmental vandalism”.

She wondered why the various species of trees and plants numbering about 140 were destroyed on land owned by a government department whose mandate was to promote tree planting.

Ms Serwah also said following claims by the EPA to the effect that air pollution killed some 20,000 people annually, "it is important that trees that provide oxygen and help purify the air by absorbing carbon dioxide are cultivated and not felled to make room for buildings".

The coordinator further appealed to the President to use his good offices “to preserve Parks & Gardens lands for greenery purposes, particularly in the wake of the effects of climate change on the country”.

“We must ensure that the department's lands are protected for botanical purposes and not appropriated for buildings. Any public, private partnership (PPP) agreement on that land should be environmentally focused.

"If the Ministry of Local Government needs space for its other functions, it can either refurbish a dilapidated government building or develop an underutilised government land. It is unacceptable to appropriate land earmarked for growing trees and plants,” she added.

The importance of trees to human health, the coordinator emphasised, could not be overstated, hence the need to ensure that Ghanaians had access to well-managed parks to unwind, relax and enjoy nature.

She, therefore, advocated that every metropolitan, municipal and district assembly (MMDA) area should have a decent park or two for relaxation and preservation of nature.

Ms Serwah further claimed that the department’s land, about 10 acres, had been appropriated over the years for the development of concrete structures.

She, therefore, asked the Lands Commission for a list of areas designated for parks and open spaces in Accra to ensure that "lands earmarked for open spaces are not grabbed for other purposes”.

“We want to ensure that remaining lands of the department, including areas earmarked as open spaces in Accra, are used for greenery and not for buildings or the expansion of Accra's concrete jungle,” she added.