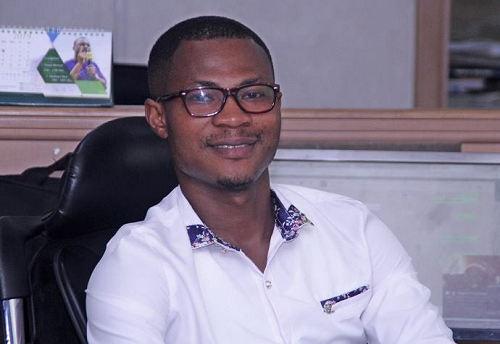 A Reporter with the Graphic Online, the online portal of the stables of the Graphic Communications Group Limited (GCGL), Mr Zadok Kwame Gyesi, has been nominated for an award in the Open Forum Agricultural Biotechnology (OFAB) media awards.

The awards, which is slated for today [Friday, October 16, 2020], aims at recognising exemplary journalism that stimulates best practices in the adoption of agricultural technologies, particularly agricultural biotechnology.

Mr Gyesi would be honoured together with other print/online, radio and television journalists who have contributed to discussions on the agriculture sector in Ghana.

The OFAB Media Awards provide an opportunity to enhance knowledge-sharing and awareness creation of agricultural biotechnology that will raise understanding and appreciation of the technology and contribute to building an enabling environment for informed and timely decision making.

Mr Gyesi has carved a niche for himself by researching and writing on the agricultural sector since he joined the Graphic team some years ago.

The OFAB, a Non-Governmental Organisation (NGO) with focus on agriculture, will host the fourth edition of its media awards for journalists reporting on agriculture in Ghana on the theme, “Credible Science Reporting, a Tool for Science Led Economic Development in Ghana”.

The awarding criteria for the yearly awards scheme, which was instituted in 2017, will be based on key considerations such as the scientific accuracy in reporting biotech related stories, initiative, originality, clarity of interpretation and value in fostering a better public understanding of agricultural biotechnology and its impacts.

The OFAB, an initiative of the African Agricultural Technology Foundation (AATF), is a platform that provides an opportunity to enhance knowledge-sharing and awareness creation of agricultural biotechnology.

The OFAB Ghana engages with various stakeholders during conferences, workshops, and stakeholder meetings, to bridge the gap between scientists, policy makers and the public.

Mr Gyesi is an award-winning journalist and writer with Graphic Online, the online news portal of the Graphic Communications Group Limited.

Aside journalism, he is also a poet and a gospel musician.  He has received several awards and recognition for his work, including the best reporter in SMEs and best Online Feature writer by the Ghana Journalists Association (GJA) in 2015 and 2016 respectively.

He also received a recognition in maiden Migration and Free Movement Reporting Awards in Ghana, organised by the Media Response with support from the ECOWAS Commission, European Union and the International Organisation of Migration in 2018.

He also emerged winner in the online category of the maiden open defecation free media contest in Ghana organised by the UNICEF in 2016.