GIFEC to set up 200 ICT labs this year - GIFEC Administrator

The Administrator (CEO) of the Ghana Investment Fund for Electronic Communications (GIFEC), Mr. Prince Ofosu Sefah, has reiterated that 200 more ICT labs will be established this year, as part of its Cyberlabs Programme.

He said this when he inspected selected Cyberlabs, Community ICT Centres (CICs) and Rural Telephony Sites, and engaged key stakeholders of the Fund in the Western Region.

He indicated that equipment will soon be deployed to the new CICs for their operationalisation, and reiterated the need to establish Municipal/District multi-stakeholder Management Committees to manage and maintain the ICT centres, to continue to benefit the people of the community.

He also mentioned that some of the CICs will facilitate the training of over 10,000 citizens this year, as part of GIFEC’s ICT Capacity Building and Skills Development Programme.

He admonished the communities to develop a solid maintenance culture, supported by a similarly improving culture at GIFEC, to ensure the people continue to benefit from these resources for a longer time. 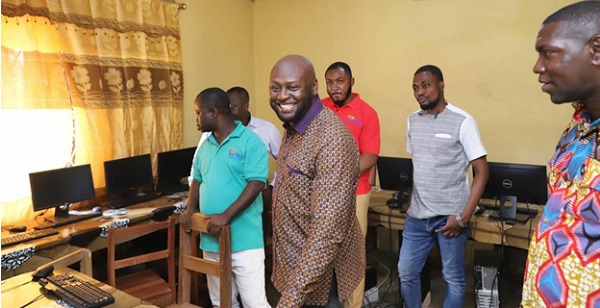 The project is being implemented by GIFEC on behalf of the Ministry of Communications and Digitalisation, under the leadership of Hon. Mrs. Ursula Owusu-Ekuful (MP and Sector Minister), as part of Government’s unprecedented $200 million Ghana Rural Telephony and Digital Inclusion Project, which started in 2020 and slated to be completed in 2023, and which is to build 2,016 Rural Network Sites. The project has built about half of the planned 2,016 Sites so far.

He highlighted the uniqueness of the Nkakaa Site, which uses Aerial Fibre technology, a solution used in communities with difficult topography, and is being deployed in five (5) communities within the Western and Western North Regions, in order to overcome technical constraints that had hitherto made it impossible for these communities to get cell phone Network Access.

Mr. Sefah also paid a courtesy call on the Chief of Amuni, Nana Twumasi Ampaw, who communicated his utmost appreciation to GIFEC for its intervention and encouraged more engagements for an enhanced relationship between the community and GIFEC. There, Mr. Sefah responded to reports of unstable electricity in the area with a promise to get back with a possible solar-powered solution. He also promised to explore adding another site in the area, to improve the quality of the Network.

Earlier on, on July 1st, in Takoradi, Mr. Sefah engaged Skyy Power 93.5 FM to share more with listeners across the Region on what does, including the organisation's increased projects and activities because of unprecedented investments of this government in digitalising the country.

His visit to the Western Region forms part of his tour of GIFEC Project Sites across the country to inspect and engage with key stakeholders.

He had recently visited the Central and Ashanti Regions.