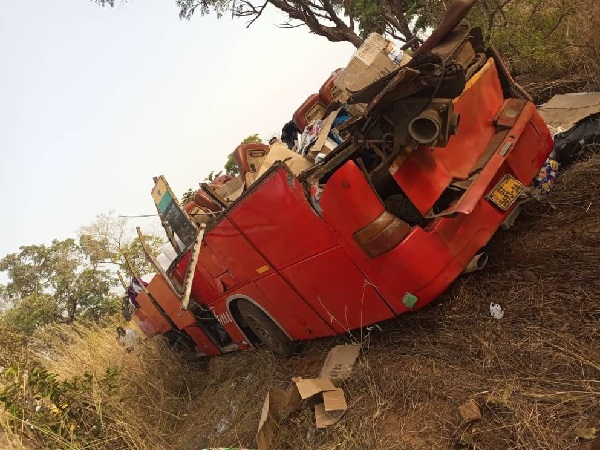 Nine persons died and nine others were injured when a passenger bus carrying them was involved in an accident at Gindabour in the Sawla-Tuna-Kalba District in the Savannah Region yesterday morning.

Police said preliminary investigation suggested the driver dozed off while the bus was in motion, resulting in the accident.

The bodies of the deceased, which included three children, have been deposited at the Wa Government Hospital mortuary, while the injured are receiving treatment at the same facility.

The VVIP-branded bus, with registration number GT 5693-16, was travelling from Accra to Wa, capital of the Upper West Region.

The accident is said to have occurred when the vehicle veered off the road and crashed into a tree.

The Savannah Regional Police Public Relation Officer, Inspector Adjekum Owusu, told the Daily Graphic that preliminary investigation by the police revealed that the driver dozed off while the bus was in motion.

“The vehicle veered off the road and crashed into a tree in the nearby bush. The tree ripped off parts of the vehicle and on the spot nine passengers died, while nine others sustained injuries," he stated.

The driver of the bus was said to be among the injured.

Emerging details suggested that the bus left Accra with 45 passengers, but had just 18 aboard by the time it left Bole towards Wa.