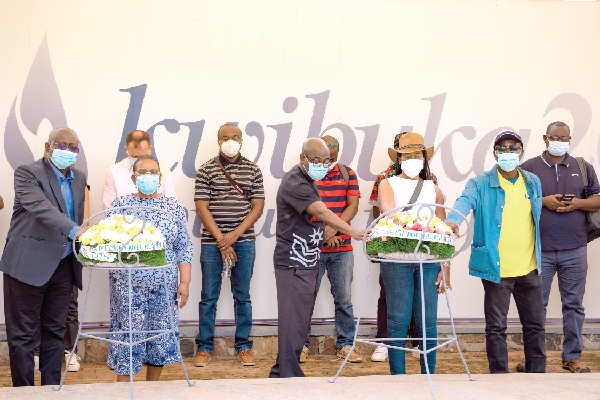 The Ghanaian business delegation to Rwanda laid wreaths at the Kigali Genocide Memorial in memory of the victims of the1994 genocide in that country.

Leaders of the 30-member delegation who visited that country to explore business relations, laid two wreaths and also observed a minute’s silence at the memorial where more than 250,000 remains of Tutsis collected from Kigali after the genocide were reburied in a dignified manner.

There are 230 other genocide memorials across the country.

The team was also given a guided tour of the genocide archive at the memorial where they were taken through all the stages in the extermination of more than a million Tutsis in 100 days.

It became palpable from the account of Guide Officer, Mr Claude Mugabe, a survivor who was nine when the global shocker took place, that prior to colonisation, Rwandans lived as one people, with the Tutsi, Hutu and Toa categorisations used only to differentiate them according to how much wealth and influence they possessed in a community; a class society rather than an ethnic division.

Perpetrators of the dastardly act, according to him, were a few people in power who planned it over a long period of time with antecedents in the early 1960s, shortly after independence, and executed same by brainwashing people, culminating in the last stage of issuing identity cards to make it easy for isolation and extermination.

The genocide archive is made up of pictures of the dead, some as young as 15 months; some dresses and attire they wore when their bodies, which were riddled with bullet holes, were found; account of some survivors in both videos and prose, including children below 15 years who recounted how their parents were killed.

In some instances, they narrated how they also suffered attempted killings but were saved by strange circumstances they considered to be “the grace of God”.

An 11-year-old recounted how a man who used to eat from their house and worked on her father’s farm ended up killing her parents and also hitting her with a machete, although they all pleaded with him to spare their lives. She said she only survived after her assailant left her to her fate thinking she had died.

The horrifying narratives at every turn of the memorial, left some members of the delegation sobbing, including this reporter.

The United Nations Assistance Mission for Rwanda (UNAMIR) delayed an order, until it was too late to use force to stop the mass killings which lasted for 100 days.

It took the bravery and determination of the Rwandese Patriotic Force (RPF), led by current President, Mr Paul Kagame, with the support of a detachment of UN soldiers, mostly Ghanaians, to secure important territories in the capital and regain control of the country.

After the end of the civil war, Mr Kagame set into motion a healing process, which included a local community justice system and a reconciliation process known as Gacaca.

While the International Criminal Tribunal for Rwanda, which sat in Arusha, Tanzania, tried and convicted high-level instigators and perpetrators of the crime against humanity, the local Gacaca system settled 1.9 million cases, including 12,000 genocide cases over a 10-year period.

Kwibuka, an anniversary held every year to remember, renew and reunite the people, reminds all Rwandans to forge ahead and never allow such inhuman acts to recur or blight their future.