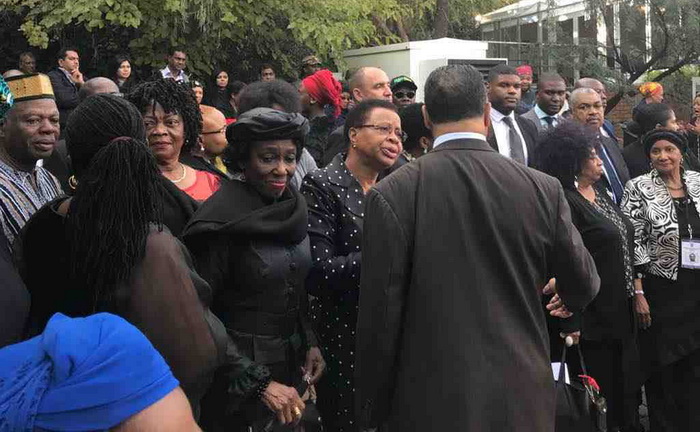 The delegation, which arrived in South Africa on Wednesday, was at the Mandela House on Friday where they paid their final respects to Winnie at a memorial event where Winnie’s body was brought to the house where she lived with Nelson Mandela before he was incarcerated. Nelson moved into the house in Orlando in 1946.

On Saturday the delegation participated in a well-attended burial service held at the Orlando Stadium in Johannesburg’s Soweto Township.

In tribute to the fallen hero, Nana Konadu Agyeman-Rawlings described Winnie as one who “singularly embodied the catalyst for uniting people on different continents towards one cause – freedom for Madhiba, freedom for South Africa.”

The statement added, “Her undeniable sacrificial and unflinching dedication to and love for her husband, the great Madhiba Nelson Mandela, throughout his protracted incarceration, as well as children over the years will be remembered by generations to come.”

Nana Konadu said, “Mama Winnie’s fearless activism will not be easily forgotten. Winnie was the bravest of the brave. She carried her defiance with quiet dignity. Her legacy will live on as it resonates with heroic stories of what true legends are made.

“A great and courageous beacon, warrior and queen of Africa has passed on, but the challenge to succeeding generations to reach for the aspirational goals that her exemplary life attained, in significant measure, lives on in the hearts of the sons and daughters of Africa,” the former First Lady stated.