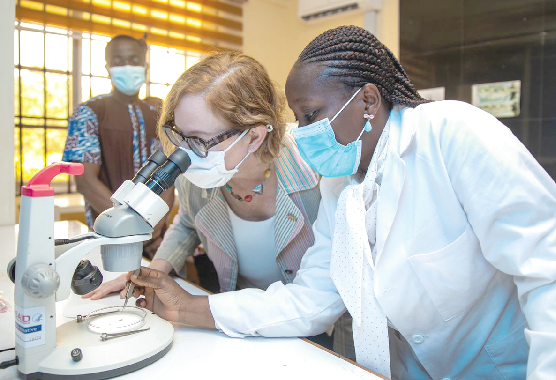 Ms. Nicole Ann Chulick (2nd from right), Deputy Chief of Mission, US Embassy, looking into a microscope with a staff at the Malaria Vector Control Link office in Tamale during the visit

The US government, through the United States Agency for International Development (USAID), is currently implementing a project titled: “Ghana Agricultural Governance and Economic Empowerment (AGREE)” which has helped to establish Women in Agriculture Platforms (WAPs) in northern Ghana.

This is intended to sustain women’s participation in agriculture policy implementation and monitor agriculture service delivery at the local government level.

These platforms have become avenues for mobilising women at the community level to actively participate and influence local-level agricultural processes.

Through USAID/Ghana support, WAPs is represented during the district assembly’s Medium-Term Development Planning (MTDP) sessions, which affords the women the opportunity to ensure that the plans and funding of the district reflect women’s needs and aspirations in that part of the country.

To learn at firsthand the activities of USAID and the Presidential Malaria Initiative (PMI), especially in the northern part of the country, the Deputy Chief of Mission (DCM) of the United States (US) Embassy in Accra, Ms. Nicole Ann Chulick, has paid a working visit to the Northern Region.

The visit was also to introduce herself to both state and non-state actors in the region who are working to ensure the successful implementation of the programmes by the USAID and under the PMI.

It was the first visit to the Northern Region since she assumed duty in Ghana about three weeks ago.

Ms. Chulick also paid a courtesy call on the Northern Regional Minister, Alhaji Shani Alhassan Shaibu, at the Regional Coordinating Council (RCC) where she expressed the US government’s support and commitment to partner the government to achieve the desired growth and development in northern Ghana.

During her visit, Ms. Chulick also met with the executive of the WAPs in Northern Ghana, where she was briefed on the successes of the project that had economically empowered women in the project beneficiary areas and built the capacities of beneficiaries on how to effectively engage with their assemblies to promote sector coordination and accountability between government agencies and citizens.

It has also helped to sustain regular engagements between citizens and local government authorities on agriculture while building the capacities of beneficiaries on alternate dispute resolution (ADR) and conflict mediation, and strengthening stakeholder collaboration and improved conflict management at the local levels.

Ms. Chulick also visited the secretariat of the Malaria Vector Control Link in Tamale, established with US funding through the PMI, to monitor mosquitoes’ resistance to insecticides used in malaria control, especially in indoor residual spraying (IRS).

She also visited the University for Development Studies (UDS) Primary School, supported by the USAID, where she interacted and read to children as part of the literacy development USAID was supporting.

Since 2015, USAID has worked with the Ministry of Education and the Ghana Education Service to develop and implement a curriculum to enhance reading with comprehension using the 11 official Ghanaian languages for instruction.

USAID has also distributed over four million reading and instructional materials to students and teachers to support the execution of this reading curriculum.

The DCM also met with the Northern Regional Peace Council (NRPC) and West Africa Network for Peacebuilding staff to hear about their work on preventing violent extremism and mitigating conflict. She affirmed the US’s commitment to peace building and interacted with USAID local staff based in Tamale.

Ms. Chulick also joined in a discussion with two US government alumni working in the field of agriculture and also met and congratulated Embassy Ghana’s 2019 Woman of Courage, Ms. Stella Saaki, who chairs WAP. She heard about challenges that still remained for women in agriculture and affirmed the US’s partnership with Ghana to advance its development.

Later in an interaction with the Daily Graphic, Ms. Chulick expressed her satisfaction about the programmes being implemented by the USAID and under the PMI with its partners in northern Ghana.

On the women in agriculture project, the DCM said it had increased women farmers’ access to arable land, which had significantly helped to increase productivity in farming.

She, however, noted that the women needed to be supported during the long spell of dry season experienced in northern Ghana to venture into other productive income-generating ventures to enable them to take care of themselves and their families during that period and also stem the migration of young women to the south.

She also commended the NRPC for their peace-building initiatives that had helped to strengthen local capacities for peace-building and conflict resolution in northern Ghana.