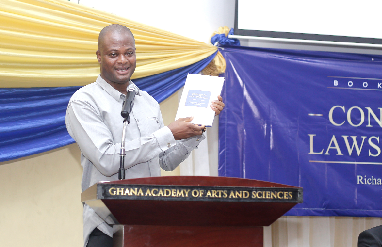 Two legal luminaries have published a book that examines conflict of laws from the perspective of the Ghanaian legal system.

Titled, “Conflict of Laws in Ghana”, it is said to be the first of its kind on the subject of conflict of laws in the country.

It is co-authored by the Special Prosecutor, Mr. Kissi Agyebeng, and a law lecturer, Prof. Richard Frimpong Oppong.

The book, which has been designed for judges, legal practitioners, students, researchers and policy makers, is grounded on authentic Ghanaian case laws and legislations.

As a course (optional) for students at the various faculties, conflict of laws is a set rules or laws a jurisdiction applies to a case, transaction, or other occurrences that have connections to more than one jurisdiction.

The book, he said, thoroughly examined the subject of conflict of laws from the perspective of Ghanaians through its development from the colonial era to date.

Present at the launch were Justices Nene Abayateye Ofoe Amegatcher and Professor Henrietta Mensah-Bonsu, both of the Supreme Court.

Also present was Justice Dennis Adjei, a Court of Appeal judge, among other notable personalities in the legal fraternity.

The book covers the traditional legs of conflict of laws, namely the rules on jurisdiction when a claim involves a foreign element, choice of law, the enforcement of foreign judgments and arbitration awards.

It also covers international civil procedure, including the international aspects of serving legal documents and taking evidence, which are said to be usually not covered in standard texts in the discipline but are nevertheless, critical to the application of the substantive principles.

The Attorney-General and Minister of Justice, Mr. Godfred Yeboah Dame, said the book would help lawyers and policy makers to practice effectively in the global business environment.

A lecturer at the Faculty of Law of the Ghana Institute of Management and Public Administration (GIMPA), Mr Victor Brobbey, described the book as “excellent”, saying it comprehensively discussed recently passed legislations and how they affected areas of conflict of law.

The Dean of the  University of Ghana School of Law, Prof. Raymond Akongburo Atuguba, urged the Attorney-General to initiate processes that would get Ghana to be part of the Hague Convention.

The Hague Conference on Private International Law is the world organisation for cross-border cooperation in civil and commercial matters that currently has 88 member states, including all of the country’s major trading partners.

Ghana is, however, not a member of the organisation.