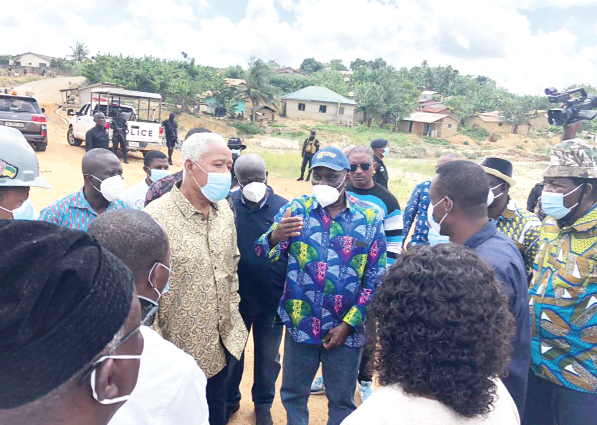 Nana Otuo Siriboe II (arrowed), the Chairman of the Council of State, interacting with Mr K. Bonzoh (right), the District Chief Executive of Ellembelle, at one of the galamsey sites. With them are Mr Kwabena Okyere Darko-Mensah, the Western Regional Minister, and other members of the Council

The Chairman of the Council of State, Nana Otuo Siriboe II, has suggested that illegal mining sites should be reclaimed and used for farming activities and afforestation, using the services of the same young people engaged in ‘galamsey’.

That, he explained, would serve as a good alternative livelihood for the young people who were currently displaced by the national fight against illegal mining.

The Western Region, he indicated, had a lot of hospitality facilities and residents who needed supply of vegetable and other agricultural produce, hence if the displaced people were trained and made to see new opportunities within the agricultural sector, it would serve a great purpose.

Nana Otuo Siriboe II made the suggestion in an interaction with the media in Takoradi last Friday after the Council had toured parts of the region.

The three-day working tour of the Western Region forms part of an initiative to get feedback from the grass roots which will help the Council appreciate the issues on the ground and inform their work as advisors of the President.

While in the Western Region, the members of the Council toured VRA plants at Aboadze, the construction site of GNPC operational headquarters, as well as some galamsey sites in the Ellembelle District.

In the opinion of the Chairman of the Council of State, fighting galamsey was not enough and stressed the need for urgent discussion on the sustainability of the fight against the menace months after government’s intervention which had deprived people engaged in the act of their livelihoods.

“After stopping their deleterious galamsey activities, how sustainable is the operation aimed at stopping

“Though it is not a good practice, people make a living out of the galamsey activities; therefore when you move them away without immediate means of livelihood, you are creating social problems,” he stated and emphasised that the council’s suggestion was one of the best solutions to the challenge.

Nana Otuo Siriboe II, who is also the Juabenhene, stressed that if a solution was not found, the fight might not be completely won.

“The galamseyers may just be scared away for the time being, only to resurface in a more serious and devastating form the next day, we have to think through all these,” he said.

Nana Otuo Siriboe II, who was also the Chairman of the previous Council of State, said the team also held a number of discussions on the T3 plant, to show its concern about the status of the plant which went off shortly after it was commissioned.

He said the council was aware of the efforts to bring the T3 plant back to life and consolidate the region’s position as the hub of power generation, and added that “after much discussion, the visit has given us further insight into VRA’s operations.”

The Council, he said, would also visit the other power enclaves to enable them to look at the power sector in its entirety.

“As a Council, these are some of the issues that we have picked during the tour and it will enable us to advise the State.

“We don’t want to be an armchair Council of State who would have its members sit in Accra and be briefed – we will rather roll up our sleeves and move to see things for ourselves.

“As a council, we can only advise the President, ministers and any other government officials when we have good and deep knowledge of issues we want to advise on, that is why we are touching base with the grass roots,” Nana Siriboe II indicated.

Briefing the delegation, the Deputy Chief Executive of the VRA in charge of Engineering & Operations, Mr Emmanuel Dankwa Osafo, explained the current state of the national power generator and the maintenance of the T3 in order to keep it safe.

He said though the T3 was sited on the premises of the authority, it had not been handed over to them, indicating that ‘‘if the T3 plant is handed over to VRA, it would look for a strategic investor to correct the defect and make it operational.”

The Western Regional Minister, Mr Kwabena Okyere Darko-Mensah, commended the members of the Council for their visit to the region which had not only helped them to learn about its challenges, but also about its rich potentials.

He expressed his appreciation to the delegation for also using their visit to share their rich knowledge of issues and expressed the hope that the information they had gathered from their visit would be helpful in their work.

In April, this year, the Ghana Armed Forces, on the directive of President Nana Addo Dankwa Akufo-Addo, launched a nationwide operation dubbed Operation Halt, to clear illegal miners out of the water bodies and forest reserves.

The action is the latest intervention being taken by the government to curb the menace, and it has seen the military under-take operations on the River Pra and River Ankobra.

They have also seized and destroyed a number of mining equipment including excavators, changfans and arrested some illegal miners,some of whom have been prosecuted in court and sentenced.

The President’s directive follows a renewed call to fight illegal mining that has become a threat to the environment, particularly water bodies and forest reserves.

At the National Consultative Dialogue on Small Scale Mining in Accra, participants described illegal mining, popularly known as galamsey, as a national emergency that required urgent and concerted effort.

President Nana Addo Dankwa Akufo-Addo, while opening the forum, called for an impartial and non-partisan dialogue for the country to reach a consensus on a sustainable method of mining minerals.

He said there were things that could be discussed along partisan lines, but issues bordering on small-scale mining and the requirement to do away with the illegalities in that sector should be beyond partisan politics.