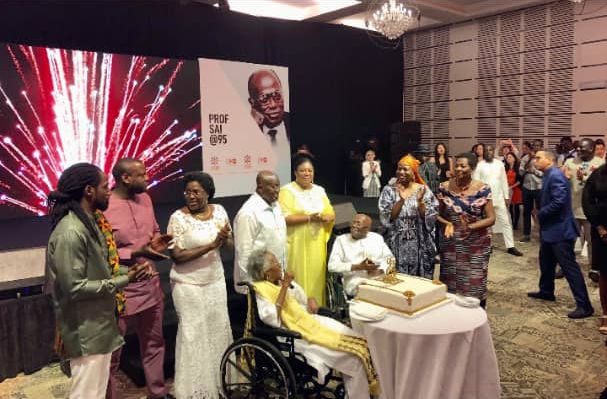 A large number of people from the international and diplomatic community joined the  United Nations Population Fund (UNFPA) in Ghana to  honour and celeberate Prof. Fred Torgbor Sai on his 95th birthday in recognition of his immense contribution to the welfare of women and girls for over 25 years.

The event, held in Accra, was graced by the President, Nana Addo Dankwa Akufo-Addo and his wife, Mrs Rebecca Akufo-Addo.

Prof. Sai, who is popularly known as the “Godfather of family Planning”, was celebrated for successfully chairing  the International Conference on Population Development (ICPD), a 1994 meeting in Cairo where 179 governments adopted a revolutionary Programme of Action and called for women’s reproductive health and rights to take centre stage in national and global development efforts.

Speaking at the event, the Minister of Planning, Professor John Baffour Awuah, commended Prof. Sai for his active role in national and international development and the courage he demonstrated in advocating for reproductive health and rights.

He said Prof. Sai helped the global community to see the linkage between reproductive health and rights and national and international development and that had seen so much impact and that alone made him worth celebrating.

“ This is why the government and the president did not hesitate to join the UNFPA to celebrate him and we are grateful to him. We wish him good health and more blessings on earth,” he said.

The Executive Directer of the UNFPA, Dr Natalia Kanem, who was in the country for the event, said on the occasion of the UNFPA’s 50 anniversary, it declared a tripartite celebration in Ghana combining it with the 25th anniversary of the ICPD and the 95th birthday of Professor Sai.

She said the UNFPA adored and appreciated Prof Sai for his contributions to the ICPD agenda and for being a strong advocate for reproductive health and rights.

The UNFPA, she added continues to keep the flames of the ICPD agenda burning and was committed to working with governments ensure every pregnancy was wanted, every childbirth was safe and every young person's potential was fulfilled.

In his remarks, Prof. Sai noted that said although much had been achieved since the Cairo ICPD agenda, more needed to be done to ensure that women took absolute control of their bodies and that their reproductive health and rights were not undermined in any way.

“ Twenty-five years down the line, this celebration is critical platform for us to take stock and review progress made with the ICPD agenda and find ways to accelerate the process of delivering absolutely on the objectives of the ICPD,” he said.

Prof. Sai said if stakeholders did not fight collectively and individually to sustain the gains made with the ICPD so far, which he said was not even enough after 25 years, modernity and other arising issues in the area of reproductive health rights could gradually erase the gains made.

He lauded the government for introducing the free Senior High School policy and said it would enable more people, particularly, women to be educated.

“Educated women and girls are in the position to make better and informed choices with regards to their bodies and their reproductive health. Educational empowerment would also help reduce teenage pregnancies because girls and boys would make informed choices and  will be well vested into issues of comprehensive sexuality education,” he said.

Prof. Sai further called for policies that would force men to be responsible for their children right from birth to address the current situation where fathers shirk their responsibilities to their children, leaving women to bear the burden alone.

“ This practice infringes on the rights of the women with whom they have those children. These women go through so much to raise these children and it is unfair. I challenge the government to have a discussion around this,” he said.

writer’s email This email address is being protected from spambots. You need JavaScript enabled to view it.