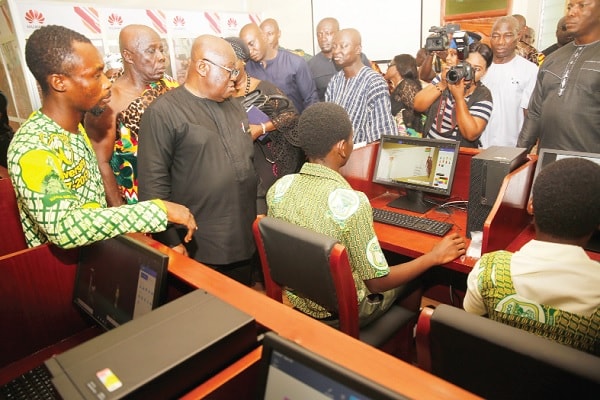 President Akufo-Addo observing a display of ICT skills by some students after the inauguration of the J.B. Danquah Centre. Follow @Graphicgh

President Nana Addo Dankwa Akufo-Addo has inaugurated the GH¢2.2 million J. B. Danquah Memorial Centre in Kyebi in the Eastern Region, with the declaration that Ghanaians would never forget the contributions the man described as the Doyen of Ghana Politics made to the birth and development of the nation.

The centre, which was sponsored by Huawei Ghana, a Chinese telecommunications company, has facilities including an office complex, an exhibition centre, a conference hall, a children’s library, an adult’s library and an ICT centre with over 30 computers and accessories.

The inauguration was witnessed by the Okyenhene, Osagyefuo Amoatia Ofori Panin; the Minister of Communications, Mrs Ursula Owusu-Ekuful; the Minister of Works and Housing, Mr Samuel Atta Akyea, and other dignitaries.

More to learn about Dr Danquah

President Akufo-Addo said many people assumed they knew everything about Dr Danquah but the centre’s library, which was yet to be stocked with a wide array of books and scholarly articles of Dr Danquah, would show that there was still a lot to learn about him.

“It is my hope and prayer that everyone who uses this centre will be inspired by the life of this most remarkable man who was responsible for so many of the positive things that characterised the origins and development of our nation,” he added.

The President explained that the centre would also provide a platform for the youth of his native Kyebi to leap into the digital world.

Describing Dr Danquah as his uncle, President Akufo-Addo said he died in the dungeons of the Nsawam Medium Security Prison about 53 years ago and that in his nearly 70 years of life on earth he lived a life truly fulfilled, rich in output and significance and extensive in reach.

Referring to Dr Danquah as “an educationist, freedom fighter, historian, journalist, jurist, philosopher, playwright, poet, scholar, statesman and theologian”, the President said he was a member of the ‘Big Six’ who are rightfully acknowledged as the founding fathers of Ghana.

President Akufo-Addo stated that Dr Danquah gave the country its name after years of research into the history and traditions of the people of the Gold Coast and fought for the union of the geographical entity now referred to as Ghana.

He further noted that Dr Danquah fought to defend the liberties of Ghanaian people by insisting on a democratic system of government with the rule of law as the best form of government for independent Ghana and it was in the course of that that he literally gave his life in cruel imprisonment, without trial, at the Nsawam Prison.

President Akufo-Addo said although Dr Danquah never exercised executive authority in the state, his influence on Ghanaian history had been astonishing and could be felt in virtually all areas of national life — from constitutional, cultural, economic, educational, intellectual, moral and political to religious.

He added that several key institutions of Ghana owed their inception directly to his works, including the Cocoa Marketing Board, the University of Ghana, the Kwame Nkrumah University of Science and Technology, the Bank of Ghana, the GCB Bank and the Accra Sports Stadium.

He said Dr Danquah remained free of personal hostility and hatred and that soon after his release from his first period of detention in 1962, he found no difficulty in exchanging pleasantries at an event with Dr Nkrumah.

That, he explained, was because to him the awards ceremony where he exchanged pleasantries with his gaoler, Dr Nkrumah, was an honour for all Ghanaians.

The Chinese Ambassador to Ghana, Mr Shi Ting Wan, said President Akufo-Addo, on his recent trip to China, reached an important consensus with his Chinese counterpart, President Xi Jinping, which was being implemented.

He said his country was helping Ghana to address human resource shortage, inadequate infrastructure and insufficient industrialisation without the attachment of any strings.

He added that currently China was providing about 1,000 short-term training opportunities and hundreds of scholarships every year for Ghanaians.