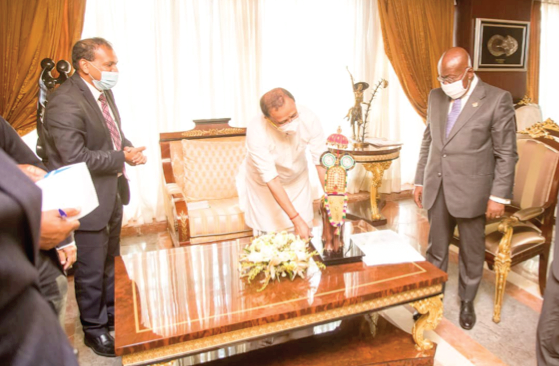 The Minister of State for External Affairs of India, Mr Shri V. Muraleedharan, has conveyed his country’s best wishes to President Nana Addo Dankwa Akufo-Addo and the people of Ghana.

This was after Mr Muraleedharan attended last Thursday’s inauguration of President Akufo-Addo for his second term of office on the precincts of Parliament House in Accra.

Accompanied by a senior officer in the Foreign Ministry of India, the January 6-7 visit to Accra also reflected India’s friendly and close ties with Ghana.

“In the afternoon of January 7, the Minister of State called on the President of Ghana and conveyed the greetings and good wishes of the leadership in India on his assuming office as President of Ghana for a second term,” a statement from the High Commission of India in Ghana said.

It added that during his discussions with the President, Mr Muraleedharan conveyed his support for deepening India-Ghana relations in all areas of mutual interest.

On arrival last Wednesday, the minister was received by the High Commissioner of India to Ghana, Mr Shri Sugandh Rajaram, and other senior officials of foreign office protocol.

The statement said the participation of the Minister of State for External Affairs of India in the presidential inauguration ceremony again demonstrated the importance that India attached to Ghana.

“The visit is expected to provide further momentum to bilateral partnership and enhance the mutual goodwill of the people in both countries,” it said.

The Minister of State also met the Malayalee Association of Ghana in the afternoon of last Wednesday, and also addressed the Indian community in Ghana in a community reception hosted by the High Commission of India, Accra, the same day.

He also launched the Indian Community Forum in Ghana, an initiative of the High Commission of India, during the event.

Thereafter, the Indian High Commissioner hosted a dinner in honour of the Minister of State, where senior ministers and dignitaries of Ghana were present.

The statement added that the visiting Indian Minister of State then participated in the swearing-in ceremony of President Akufo-Addo.

Before his departure to India last Thursday evening, he was hosted by the Indian Association of Ghana, an umbrella association representing the vibrant Indian community in the country.

“India shares close, warm and friendly relations with Ghana which are cemented by mutual trust, development partnership and presence of a sizable Indian Diaspora. In the last few years, India’s engagement in various fields with Ghana has intensified,” the statement pointed out.

President Akufo-Addo visited India for the Founding Conference of the International Solar Alliance in March 2018, while the President of India’s first ever State visit to Ghana occurred in June 2016.

The Vice-President, Dr Mahamudu Bawumia, was also the Guest of Honour at the 14th CII-EXIM Bank Conclave held in March 2019 at New Delhi.

Besides, there have been several ministerial and high level visits from Ghana to India and vice-versa in the recent past.

India has extended concessional lines of credit and buyers credit lines facility to Ghana close to $1 billion in sectors such as agriculture, water, transport, transmission lines, infrastructure, railways, among others.

The iconic Jubilee House, constructed with Indian assistance, stands as testimony to the excellent bilateral relations between the two countries.