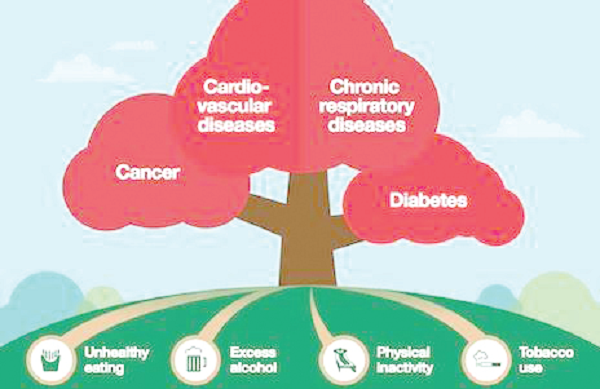 Conditions such as hypertension, stroke, diabetes and cancers have been identified among the top four causes of mortality, especially among the aged in Ghana.

In recent times, the Ghana Health Service (GHS) says there has been a sharp increase in the prevalence of Non-Communicable Diseases (NCDs) among people between 50 and 60 in the country.

The diseases, which have been described to be no respecter of persons, have been reported among very young person who are 27 and below.

It is estimated that 34 per cent of deaths and 31 per cent of disease burden in the country are due to Non-Communicable Diseases.

An estimated 86,200 persons die annually with nearly 55.5 per cent of the dead being less than 70 years and 58 per cent being males.

Stakeholders such as the Health Promotion Unit of the Ghana Health Service and PATH, an international non-profit global health organisation, focused on working to accelerate health equity, have expressed worry over the prevalence of chronic NCDs

The Director of Health Promotion at the GHS, Dr Dacosta Aboagye, said Non-Communicable Disease (NCD) were non-infectious health conditions, meaning it could not be spread from person to person.

“Most NCDs are chronic; they cannot be totally cured, and the person must live with it and manage it. A combination of genetic, physiological, lifestyle and environmental factors can cause these diseases,” he said.

He said the risk factors had also increased over time making NCDs a significant contributor to Ghana's disease burden.

“Typical of these Chronic NCDS are hypertension, stroke, cancer and diabetes, which health experts say were no respecter of persons, affecting young and old, wealthy and poor communities regardless of geographical location,” he said.

He said the high prevalence could be attributed to low education and so the GHS and its partners were prioritising public education on NCDs.

He said it was critical for people to understand the nature of those diseases so that they could make informed choices to improve on their health.

“NCDs are no respecter of persons, they can affect people of all age groups, regions and countries. These conditions are often associated with older age groups but evidence shows that 15 million of all deaths attributed to NCDs occur between the ages of 30 and 69 years.

“Unhealthy diets and a lack of physical activity may show up in people as raised blood pressure, increased blood glucose, elevated blood lipids and obesity. These are called metabolic risk factors that can lead to cardiovascular disease, the leading NCD in terms of premature deaths.

“Of these premature deaths, over 85 per cent are estimated to occur in low- and middle-income countries. Children, adults and the elderly are all vulnerable to the risk factors contributing to NCDs, whether from unhealthy diets, physical inactivity, and exposure to tobacco smoke or the harmful use of alcohol,” he said.

He added that further to behavioural risks, environmental and socio-economic factors such as air pollution, climate change, trade agreements and aggressive marketing of unhealthy products were accelerating the NCD epidemic.

The Chief of PATH, Dr Patience Cofie, said NCDs were leading causes of death in the world; yet, there was little investment in preventing them.

He said an important way to control NCDs was to focus on reducing associated risk factors.

“Low-cost solutions exist for governments and other stakeholders to reduce the common modifiable risk factors. Innovative ways of mobilizing funds and strengthening political will to support NCD control and prevention are required.

“In Ghana, achievable interventions include passing tobacco legislation and enforcing laws on food labelling to control salt and energy content of processed foods. Monitoring progress and trends of NCDs and their risk is important for guiding policy and priorities.

“The drive to enrol more registrants into the NHIS should be intensified, as well as restructuring benefits package to include more chronic disease medicines and treatment. Screening and check-up visits to the health facility need to be considered in the NHIS and private health insurance schemes,” he said.

Dr Cofie said in order to lessen the impact of NCDs on individuals and society, a comprehensive approach was needed in requiring the input of all sectors.

She said Ghana had participated in and endorsed several international, regional and sub-regional resolutions and declarations on NCDs, which were yet to be fully implemented.

“To bridge the gap between policy rhetoric and implementation, collaboration and joint action by government and its various relevant sector ministries, health and public policymakers, civil society, industries, researchers and patient groups is urgently needed.

“Government needs to give high priority to policies and funded programmes for the prevention and control of NCDs. Public-private partnerships need to be built for effective and coordinated NCDs interventions,” he said

“The pharmaceutical industry is crucial and should aim to ensure availability, affordability and accessibility of low-cost generic drugs for the management of chronic diseases,” he added.

She said that was because the high cost of care for persons with any or a number of the chronic NCDs worsened the already bad economic situation of the poor.

“Awareness and knowledge are limited, health systems are weak and there are no known chronic disease policies in the country,” he said.

He added those factors contributed to increasing risk, morbidity and mortality thus making chronic diseases to constitute a public health and a developmental problem that should be of urgent concern not only to the Ministry of Health and GHS.

As part of the agenda, heads of state and government committed, as part of delivering on SGD goal three, which advocates good health and well-being, to: reduce by one third premature mortality from NCDs, strengthen responses to reduce the harmful use of alcohol, achieve universal health coverage (UHC) and strengthen the implementation of the WHO Framework Convention on Tobacco Control (FCTC).