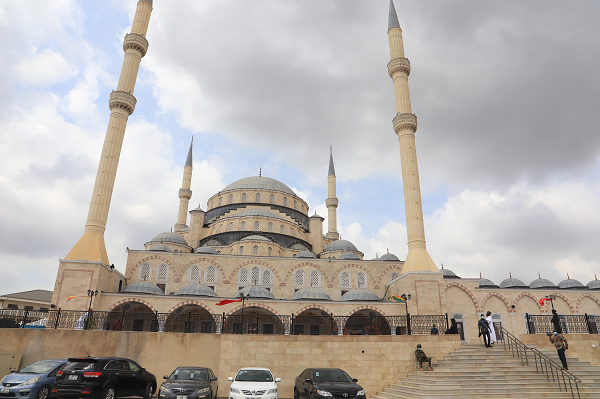 A national Mosque Complex, one of the symbols of Islam, has been inaugurated in Accra, with the National Chief Imam leading the first official Jummah prayers from the imposing edifice.

Other dignitaries who assisted in the inauguration of the $10-million mosque, which is the second of its kind in West Africa, include the National Chief Imam, Sheikh Osmanu Nuhu Sharubutu, and the President of the Directorate of the Religious Affairs of Turkey, Professor Dr Ali Ebras.

With a Turkish Islamic civilisation architectural signature, the 15,000 seater-capacity mosque complex built on a 42-acre land at Kanda has within it the Grand National Mosque, school, library, dormitories, workers and guest residences, clinic with pharmacy, Islamic morgue and office complexes for both the project developer (the National Chief Imam) and the project managers, Diyanet, GANADER and HUDAI.

The beautiful complex is a replica of the famous Blue Mosque in the Turkish capital, Istanbul, which is one of the most visited mosques in the world for the purposes of tourism and devotion.

The Turkish non-governmental organisation (NGO), Human Development International (HUDAI), provided funding, with the support of the Turkish government and some Ghanaian Muslim philanthropists.The ceremony to inaugurate the monumental edifice attracted a wide array of people from all faiths and walks of life.

President Akufo-Addo urged Muslims in the country to continue to foster unity in Ghana and by extension the unity of the Ghanaian people.

He said he was excited that the four minarets of the mosque, towering about 65 metres from the ground, which was visible from many parts of Accra, added to the beauty of the skyline of the nation’s capital.

President Akufo-Addo explained that what enthused him more was that although Ghana had a Christian majority country, a symbol of Islam could beautifully adorn its landscape.

That, the President added, demonstrated the beauty of religious harmony that abounded in Ghana and continued to be the envy of the world.

Explaining the importance of a mosque in the theological architecture of Islam, President Akufo-Addo said the first edifice that Prophet Muhammad built on his migration from Mecca to Medina was a mosque.

“To this day, the Prophet’s mosque in Medina continues to be a site of pilgrimage for devotees from across the world. The mosque is not just a place of prayer, it is the hub for social and cultural activities. In other words, a mosque is supposed to bring people together and not divide them,” he added.

He said the mosque was also an indication of the strong bonds of friendship and cooperation that existed between Ghana and Turkey and noted that “Ghana is grateful for the sacrifice made to help bring this project to fruition”.

He urged the leadership of the Muslim community to take good care of the mosque and build its profile as a tourist destination for travellers and devotees into Ghana.

The President directed the Minister of Tourism, Arts and Culture, Dr Ibrahim Awal, to craft an appropriate strategy to make the beautiful edifice a place of pilgrimage and tourism.

To the amazement of the Muslims gathered, President Akufo-Addo said because the day was Friday and a Jummah, he quoted Chapter 62, verse 9 of the Holy Qur’an, which states that “Oh, you who believe when the call is proclaimed to prayer on the day of Jummah, hasten earnestly to the remembrance of Allah and leave off business. That is best for you if you know.”

He said the verse 10 also says that “and when the prayers are finished then you may have dispersed through the land and seek the bounty of Allah and celebrate the praises of Allah that you may prosper.”

President Akufo-Addo said after the prayers they should disperse into the beautiful land Allah had bestowed on all and seek their livelihood, a charge which attracted applause and exciting shouts from worshippers.

He pledged to continue to serve the people of Ghana with all his strength and heart and continue to remain faithful to his Presidential oath and expressed the hope that he could count on the support of Ghanaians to make the country great and strong.

For his part, Dr Bawumia announced that under the directive of the President, the roads around the mosque had been asphalted and the car park paved.

He added that a contract had been awarded for the construction of a pedestrian walkway for the worshippers to cross over from the major roads into the mosque.

In a speech read on his behalf, the National Chief Imam, commended former President Jerry John Rawlings and some leading members of his administration who assisted in securing the land for Muslims in the country.

Sheikh Sharubutu also commended the government of Saudi Arabia that supported initially with one million riyals and other individuals who helped for the realisation of the project.

The builders said the edifice was the biggest in West Africa, although dwarfed by the 30,000-capacity mosque in Dakar, Senegal.

A tour of the National Mosque Complex revealed its Carrara marble exterior fittings and the four signature minarets.

The upper levels of the interior are dominated by blue paint, with stained glass windows with intricate designs. The inner decorations include hand-drawn calligraphic verses of the Qur'an.

The floors are covered with carpets donated by the faithful and will be regularly replaced as they wear out.

The most important element in the interior of the mosque is the mihrab, where the Imam stands, which is made of neatly sculptured marbles, with a stalactite niche and a double inscriptive panel above it.

The other striking feature of the exterior is the beautifully arranged cascade of domes around a central dome.