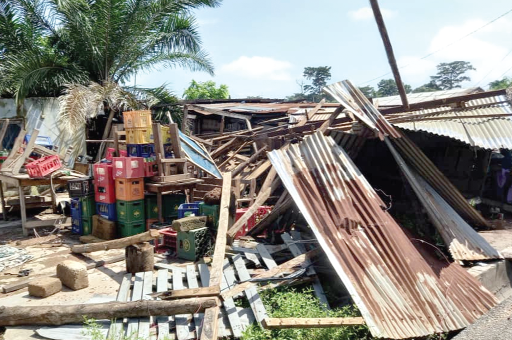 Some of the houses destroyed

A downpour last Wednesday caused destruction to several homes at Tafi Atome, a tourist and farming community in the Afadzato South District in the Volta Region.

A centre that serves as the reception for the Tafi Atome Monkey Sanctuary and Cultural Village was also affected by the storm which uprooted a lot of trees at the ecological tourist site and the jungle.

The Manager of Tafi-Atome Monkey Sanctuary and Cultural Village Centre, Mr. Francis Acquaye, told the Daily Graphic yesterday that the impact of the rainstorm was severe as a number of trees had been uprooted, with some blocking the entrance to the sanctuary, a key revenue earner for the district, the locals and the Ghana Tourism Authority (GTA).

Most of the big trees standing by the newly rehabilitated office area (cultural village centre) got uprooted and damaged the roof of one of the mini pavilions. The old washroom facility was badly damaged.

"The forest is flooded. Many trees in the forest have been destroyed. We have 16 troupes of monkeys here and each troupe consists of 120 to 140 monkeys. So you can imagine the number of monkeys stranded,” he said.

The manager of the sanctuary, however, said the monkeys were safe although some had been dislodged from their habitat, the trees.

The rainstorm, which started around 3 p.m. and lasted for about 30 minutes, ripped off the roofs of houses, rendering some residents homeless.

Some officials of the Afadzato South District Assembly and the National Disaster Management Organisation (NADMO) have visited the community to ascertain the level of damage.

A delegation from the GTA has also visited the centre to obtain first-hand information about the situation.

According to some members of the community, such a disaster had never occurred.

“This is the first of its kind. The monkeys are seen crying for help as there's no place for them to live,” a resident who lives near the entrance to the sanctuary along the only road in the town that connects to Kpando, said. 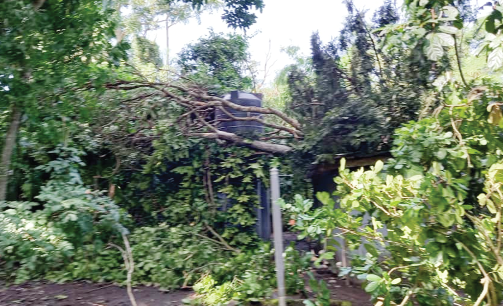 Some of the uprooted trees in the forest

Mr. Acquaye told the Daily Graphic that the numerous trees destroyed by the storm had reduced the spaces for the primates.

According to him, some of the parasite trees from which the monkeys fed were also uprooted.

As a permanent solution to the problem, Mr. Acquaye said the centre had sent an appeal to the Forestry Commission to supply seedlings for them to re-plant so that within the next two to three years, the sanctuary would recover from the loss of trees.

The commission should also assist with supervising the replanting exercise.

Mr. Acquaye also appealed to philanthropists and organisations to assist to plant more trees and put the centre back in shape as part of roofs of the structures were also ripped off. 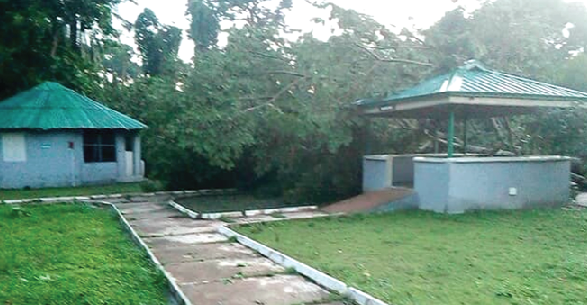 Tafi Atome is one of the four sister communities that form the Tafi traditional area. The other three communities are Tafi Agome, Tafi Mador and Tafi Abuipe, a famous kente weaving community.

The people of Atome, like the other sister communities, are predominantly farmers.

The famous Tafi Atome Monkey Sanctuary is an ancient jungle which the local folks have been traditionally protecting since the establishment of the community centuries ago.

The Monkey Sanctuary and Cultural Village, which covers a 387-square kilometres stretch, is home to the Mona and Patas monkeys, commonly known as the old world monkeys, found mostly in Ghana and Cameroun.

Their golden brown colour is laced with white furs that begin from their chins and flow all the way to their abdomen. The brown and white colours are bordered by shiny black furs that extend to the hind and parts of the fore limbs as well as the tail.

The locals consider the monkeys as totems and therefore do not disturb them, explaining their friendly demeanour that allows them to interact with community members in their homes at certain times of the day.

Aside from the monkeys, many species of birds and butterflies have been preserved in the sanctuary.

The sanctuary was developed formally to generate revenue for community development through an ecotourism concept in 1996.

Until last Wednesday’s devastating downpour in the rain forest, the Tafi Atome Monkey Sanctuary and Cultural Village had been operating as a Community Based Ecotourism Site under the auspices of the GTA.

In spite of the unfortunate disaster, the monkey sanctuary remains open to public visitations and the monkeys still interact with the people in the village.

Mr. Acquaye encouraged visitors who plan to visit the sanctuary not to hesitate in doing so.

The playful monkeys are very receptive as they often jump onto the shoulders of visitors who offer them bananas.