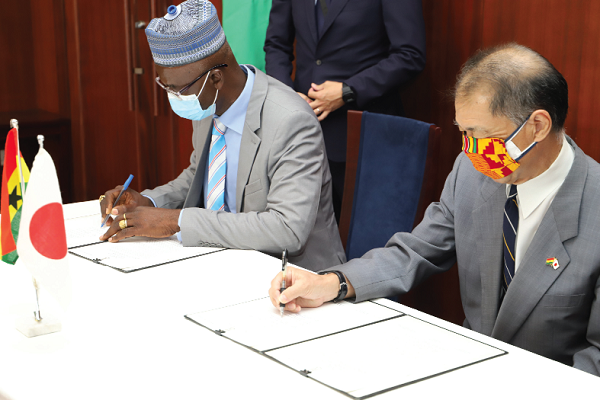 The Japanese Embassy in Ghana yesterday signed a grant agreement with four assemblies to provide basic social infrastructure for some villages in the districts and municipalities.

Projects earmarked under the agreement are Community-Based Health Planning and Services (CHPS) compounds and a girls’ model school.

Mr Tsutomu said the grant was an indication of the strong friendly relations and partnership between Japan and Ghana.

“It is the wish of the people and the government of Japan that these projects would make valuable contributions in the areas of health, education and human security,” he said.

Dr Arthur said the project came at a time when the world was facing the challenge posed by the COVID-19 pandemic, for which reason access to basic health centre was a necessity

“This project, when completed, is expected to meet the health needs of over 4,000 beneficiaries, for which we are grateful,” he said.

Dr Arthur gave an assurance that the project would be used judiciously.

He said the people of Abrem Berase in particular and the KEEA municipality in general viewed the project as ensuring healthy lives and promoting the well-being of all persons.

“It is our sincerest hope that this project will contribute to the strengthening of Ghana-Japan relations, as well as the development and prosperity of Ghana under the renewed leadership of President Nana Addo Dankwa Akufo-Addo,” he said.

He commended the Japanese government for the support to the local government sector.

“I need to mention that staff of the Local Government Service have benefitted from a number of scholarships and capacity-building programmes in Japan through JICA, including my participation in the seminar on Governmental Human Resource Management for Senior Officials in Tokyo in 2019,” he said.

For his part, Mr Zaasan said the elevation of the Babatokuma CHPS Compound to a health centre through the help of the Japanese government was an appropriate intervention that would cater for the health needs of over 18,600 people.

He said the facility was strategically located on the Kintampo-Tamale highway, which has been recording accidents, adding that it would go a long way to reduce the number of people who went to the Municipal Hospital during emergencies.

He gave an assurance that the project would be executed as planned and constantly maintained to prolong its life span for the benefit of the people.