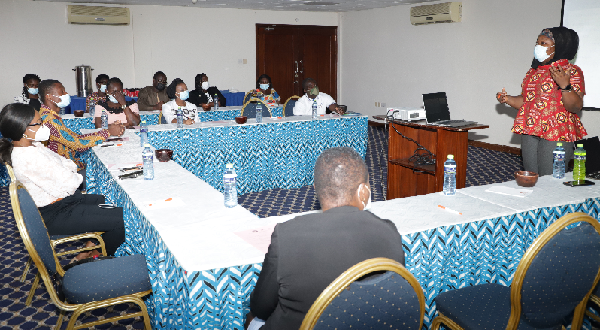 Madam Bashiratu Kamal (right), a Consultant to FIDA on women and girls safety during emergency situations in Ghana, in a discussion with participants during the dialogue. Picture: EDNA SALVO-KOTEY

The International Federation of Women Lawyers - Ghana (FIDA) is asking the government to involve social protection institutions in the development of mechanisms to address domestic violence issues, particularly in times of a pandemic.

The acting Executive Director of FIDA, Ms Susan Aryeetey, said the Ministry of Gender, Children and Social Protection for instance was not included in the COVID-19 task force.

“Gender-based institutions such as Domestic Violence and Victim Support Unit (DOVVSU), Commission on Human Rights and Administrative Justice (CHRAJ) and the Social Welfare were also not classified as essential workers,'' she added.

Ms Aryeetey was speaking during a State Actors Dialogue aimed at presenting research findings on the effectiveness of support services to survivors of Sexual and Gender-Based Violence (SGBV) during the partial lockdown last year.

It was organised by FIDA and the Open Society Initiative for West Africa (OSIWA), a non-governmental organisation, in Accra last Thursday.

Touching on the research, Ms Aryeetey said the aim of the project was to find out if the mechanisms put in place by the government during the lockdown were gender-responsive and inclusive.

“We needed to assess what had been done by State and non-State actors, like the hotlines that were initiated to help domestic violence victims call in.

She said the research was also to recommend to the government ways to strengthen responsive mechanisms during a pandemic or health crisis to better serve the marginalised.

“Although the government did well, it was important to track the weaknesses in their mechanism so that going forward, we can strengthen them to ensure that citizens, particularly women and girls, are protected in times of crises,” she noted.

Ms Aryeetey indicated that between March and April this year, about 14 deaths resulting from intimate partner violence were recorded.

“If you look at the intimate partner violence between March and April, we have had about 14 deaths, and we can see that it is an offshoot of the lockdown.

“Also, during the lockdown, the government did not provide any special resources to equip social protection institutions because they were not classified as essential service workers,” she added.

A Consultant to FIDA Ghana, Ms Bashiru Kamal, who presented the findings, said the study revealed, among others, the lack of adequate shelters, restriction of movement to report cases and the lack of information on gender-based violence as some of the findings of the research.

She said the impact of sexual and gender-based violence to women and girls during the three-week partial lockdown was worrying, hence the need to better implement interventions.