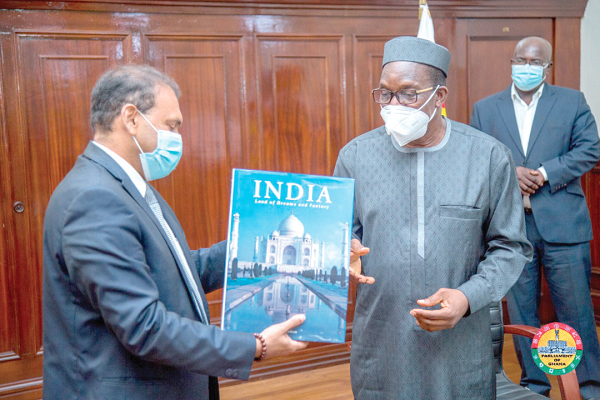 The Indian Government has extended a $180 million concessionary credit facility to Ghana as part of its development assistance to the country, the Indian High Commissioner to Ghana, Mr Sugandh Rajaram, has said.

The facility consists of $150 million for agricultural mechanisation and $30 million for improvement in water supply.

“These are huge projects that we will be finalising through a tender process. I hope that within the next one year the projects will start,” the ambassador added.

Mr Rajaram, who was speaking during a courtesy call on the Speaker of Parliament, Mr Alban Sumana Kingsford Bagbin, in Accra yesterday, said: “India and Ghana are working together in various areas, including rural agriculture, which is a priority to improve the lives of the people.”

Mr Bagbin and Mr Rajaram also discussed ways in which Ghana and India could work together to improve bilateral relations, especially in the areas of legislature, agriculture, automobile, water supply, pharmaceuticals, among others.

Mr Rajaram said as part of efforts to contain the spread of the COVID-19, India had dispatched “gift vaccines” to some neighbouring countries, including some countries in Africa.

“Up till today, we have gifted or supplied more than 85 million vaccines to over 75 countries. We have also supplied huge amounts of drugs and equipment to more than 150 countries in the last one year.

“And the resilience of the Indian people and their governance system will ensure that India recovers from its current challenges quickly. It will, however, not be possible without the goodwill and active support of the world because India believes in living, growing and prospering with the world,” he said.

The ambassador expressed appreciation for the long-standing relations between Ghana and India.

The Speaker said Ghana could tap into the “rich reservoir” of India to improve on the country’s economy and parliamentary democracy.

India is one of the fastest-growing economies in the world and is projected to be among the three global economic giants in less than 10 years.

He commended India for the huge investment it had committed into developing its human resource, which had resulted in Indians becoming chief executive officers of some technology giants such as Amazon and Google.

“I think this is something that at least Ghana can reflect over and also invest more in human resource development,” he said.

Mr Bagbin said Ghana would continue to explore opportunities of sending parliamentary staff to India to understudy that country’s IT system and other areas of parliamentary functions, adding that “there are some skills that we need to learn from Indians to become more innovative and creative”.

Mr Kyei-Mensah-Bonsu commended India for supporting other countries with COVID-19 vaccines and expressed the hope that that country works towards overcoming the rising spread of the disease, which was claiming more lives in that country.

He was also happy that India had expressed its readiness to support the development of Ghana’s railway, automobile and agricultural sectors.

For his part, Mr Ablakwa expressed his sympathy to the government and the people of India over the loss of many lives to the pandemic.

“We note that from the beginning of the pandemic, you did not keep the vaccines to yourself; no wonder the world is also extending support to you due to your selfless-spirit,” he added.