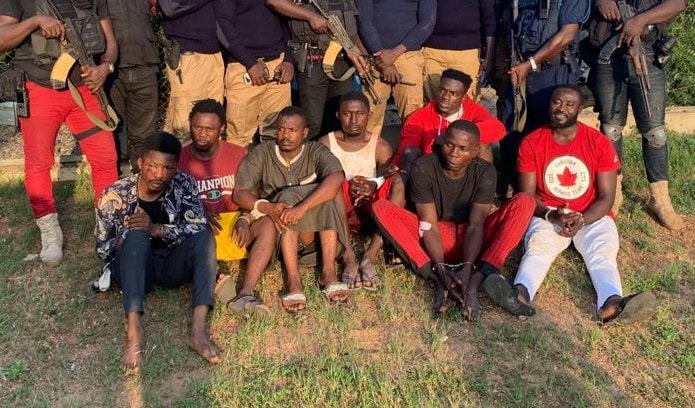 Eight suspects have been arrested by the security agencies for their alleged involvement in the kidnapping of the two Canadian women at Ahodwo in Kumasi last week.

The suspects include five Ghanaians and three Nigerians who were picked up at Kenyasi, a suburb of Kumasi, at dawn on Wednesday following security intelligence gathered.

The Minister of Information, Mr Kojo Oppong Nkrumah, who briefed the press in Accra on Wednesday on the arrests, declined to name the suspects.

He said the operation was carried out by Ghana’s security agencies, without the involvement of any foreign assets.

He mentioned National Security, the Criminal Investigations Department (CID) of the Ghana Police Service, the Bureau of National Investigations (BNI), the Special Weapons and Tactics Unit (SWAT) and Defence Intelligence as the agencies which took part in the operation.

He indicated that since the day of the abduction, security operatives had been working around the clock to rescue the two women and that intelligence gathering efforts enabled the security agencies to zero in on the persons associated with the incident.

Mr Nkrumah said one of the suspects was first arrested about 7 p.m. last Tuesday, adding that later that day the suspect harbouring the two women was also arrested.

“The whole operation lasted 25 minutes and in the end all the suspects were arrested and are currently assisting the police in their investigations,” he said.

According to him, the holding place of the two victims was identified by the security agencies, who surrounded the place, and on entering the holding area, they spotted two Nigerians who were guarding the Canadians.

Amidst the firing of shots, the Nigerians were subdued, he added.

He noted that one of the suspects got injured in the process and was now in hospital.

He said a third Nigerian, believed to be the leader of the group, was arrested later at a separate location.

He asserted that the two Canadian women, Bailey Chitty and Lauren Tilley, were unhurt following their ordeal and had been brought to Accra, where they are receiving emotional and psychological support from professionals before they travel back home.

The minister commended the security agencies for the good work and appealed to the media to avoid speculations and be circumspect in their reportage, as ongoing investigations to resolve similar kidnapping issues could be compromised.

“Equal level of attention is being given to all issues bordering on crime in the country and I want to plead with members of the public to assist the security agencies by providing information that will help them in their investigations,” he said.

When asked whether one of the suspects was a notorious football hooligan and member of one of the private security groupings with political affiliations, Mr Nkrumah said: “We have no brief that says that this person or that person is associated with this church or that religion or this political party at this point in time. At this point in time, we do not have any such brief that associates any of them to any political party.”

The two Canadian women students, aged 19 and 20, were in the country working as volunteers with an international charity when the armed men seized them in Kumasi, last Tuesday.

A 30-year-old Indian man was kidnapped at gunpoint in April in Kumasi. His abductors also sent his photos to his family with a gun pointed to his head demanding a $500,000 ransom.

A 28-year-old Nigerian, Samuel Udoetuk Wills, has been arrested in connection with the kidnapped Takoradi girls.

Police said during interrogations, Udoetuk Wills disclosed that one John Nweke, also a Nigerian, was keeping the girls.

The recent spate of abductions prompted President Akufo-Addo to declare a crackdown on kidnapping last month.

“We are all concerned about this phenomenon of kidnappings which we have not known,” he said. “I am very, very determined on the issue and decisions are being taken as we seek what will be a clear manifestation of the determination I have to deal with this matter,” the President said.