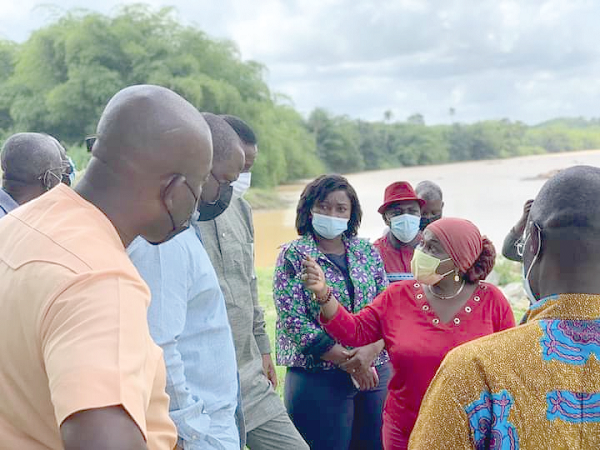 The Ghana Water Company Limited (GWCL) has warned that illegal mining activities polluting water bodies and degrading the environment in the Central and Western regions are threatening raw surface water for treatment by the company in the area.

At present, raw water flowing to the GWCL intake points in the two regions have high levels of sludge, which increases operational and maintenance cost significantly, and makes the production process strenuous.

Government has consequently renewed the commitment towards the fight against illegal mining, popularly called galamsey, warning that the perpetrators would not be spared, irrespective of their status in society or political affiliation.

Speaking after a joint ministerial tour of various water stations in the Central and Western regions, the Minister of Lands and Natural Resources, Mr Samuel Abu Jinapor, said government would combat illegal mining in the country’s water bodies head-on.

The tour was part of a general nationwide fact-finding exercise to come to terms with the state of the nation's water bodies, particularly with the worsening levels of illegal mining activities.

Mr Jinapor said government would not tolerate mining in forest reserves and water bodies, and said those "redline areas" should not be crossed.

He said it was regrettable that the Pra River had been reduced to a place of illegal mining activities, and consequently led to low water availability for processing to supply the two regions.

At the Sekyere-Hemang water station, officials of the GWCL said the turbidity level — which measures relative clarity of a liquid — had shot up to about 1,500 nephelometric turbidity units (NTU) from the hitherto about 500-800NTU at the time of construction in 2008.

The water at the intake point currently looked brownish, with a heavy silt content, which, the officials said, caused frequent breakdown of the treatment systems at least three times every month.

The situation was attributed to the sludge and silt in the muddy raw water that flowed to the intake point, which put significant pressure on the processing facility.

At the Daboase intake point, the turbidity of the water, which was around 54NTU in 2007, had increased to more than 3,000NTU currently.

The situation had been caused by an increase in volumes of sludge in the water taken for processing, resulting in significant increase in the use of alum to attain the right quality for public consumption, officials explained.

The company said the Pra, Ankobra and other smaller river bodies in the regions had all been affected by the activities of galamseyers.

Mr Jinapor said government was not against mining, stressing that “government is now more than ever committed to working to sanitise the system and ensure that mining was done the right way”.

The minister called for a national consensus and support for policy to effectively sanitise the system to tackle the problem.

The minister of water and sanitation said the fact that the country was endowed did not mean water should be destroyed, saying “we owe it to posterity to keep them safe”.

Ms Dapaah said there were new water systems in the offing for Damongo, Sunyani, Keta, Wenchi and Tamale, among others, and that it might not be achieved if the country’s water bodies were all destroyed.

She warned Ghanaians and their foreign collaborators, who had in recent years embarked on the destruction of the country’s water bodies and forest reserves, that the current ministerial collaboration would not leave any stone unturned to bring perpetrators to book.

The Managing Director of the GWCL, Dr Clifford Braimah, said the current situation needed a lasting solution, and called on partners to join the fight against illegal mining due to the imminent threat, saying "the day you realise you cannot get water flowing in your homes, you would understand the situation".

The Central Regional minister said "we should be ashamed of what we have done to our water bodies. It's an anomaly", and promised to erect a security post at the various sites to help fight the menace.

The Western Regional minister pledged to put resources at his disposal to fight the menace.