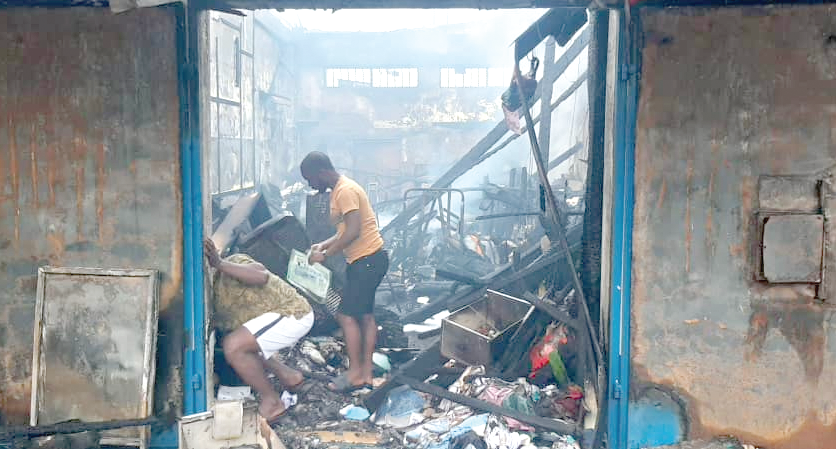 Fire last Friday razed down about 100 wooden structures used as homes by squatters at the ‘Shiashie Kiosk Estate’ in the Ayawaso West Wuogon municipality in Accra.

And in the Western Region, a warehouse and three shops near the Takoradi Central Market were also destroyed in a fire outbreak in the early hours of last Saturday.

Although no lives were lost in both incidents, many people are said to have lost their sources of livelihood, while hundreds of families have also been displaced.

The Shiashie fire was the third fire incident in three days. Last Thursday, fire burnt the storeroom of the Greater Accra Regional Office of the Electoral Commission at Sapeiman in Accra.

At Shiashie, Emmanuel Ebo Hawkson & Joshua Bediako Koomson report that the fire started about 10 p.m. last Friday and quickly spread, razing the over 100 structures down.
While the cause of the fire is yet to be established, eyewitnesses said they only heard an explosion from one of the structures.

Some of the victims said they were awoken by shouts and screams of ‘fire, fire’.

“I tried to salvage what I had in my kiosk but the fire was spreading so quickly that I could not take much,” a squatter who gave his name as Efo said.
“It was so serious that it reminded me of the explosion that occurred at the Atomic Junction two years ago”, another victim, Musah, said.

Most of the victims are temporarily putting up at the Faith Congregation of the Presbyterian Church of Ghana, Shiashie.

The Member of Parliament (MP) for the area, Ms Lydia Alhassan, visited them on Saturday and provided them with relief items such as buckets and toiletries.

“I am appealing to people beyond this constituency to come to our aid. Support them; help me support them. We have a fund; so far we have been able to raise about GH¢20,000, but it’s woefully inadequate,” she pleaded.

The National Democratic Congress (NDC) parliamentary candidate for the constituency, Mr John Dumelo, also visited the scene to commiserate with the victims and pledged to help them out of their predicament.

From Sekondi-Takoradi, Dotsey Koblah Aklorbortu reports that the Takoradi Central Market fire resulted in the total destruction of the warehouse and adjoining shops.

The cause of the fire is yet to be known.

The Western Regional Minister, Mr Kwabena Okyere Darko-Mensah, who was at the scene to assess the situation, described the incident as “unfortunate”.

According to the Western Regional Public Relations Officer (PRO) of the Ghana National Fire Service (GNFS), Mr Emmanuel Bonney, even though his men arrived at the scene on time, the intensity of the blaze made it difficult for them to control it.

As a result, “we had to mobilise seven fire engines from the Ghana Ports and Harbours Authority (GPHA), the Air Force and the Ghana Navy to assist”.

To forestall the recurrence of such incidents, the PRO of the GNFS in Accra, Divisional Officer II Mr Ellis Okoe Robinson, has urged service providers, such as the Electricity Company of Ghana (ECG), and local assemblies to work hand-in-hand with the GNFS to ensure early response to fire outbreaks.

He entreated the ECG to take fire emergency situations seriously to help reduce the impact of fires on the country and called on assemblies to ensure proper spacing of houses in their respective areas to provide easy access for personnel of the GNFS in emergency fire cases.

He also asked the assemblies to set up fire taskforces in the various communities to support education on safety measures, early detection and containment of fire.

He also called for attitudinal change towards fire safety and prevention.