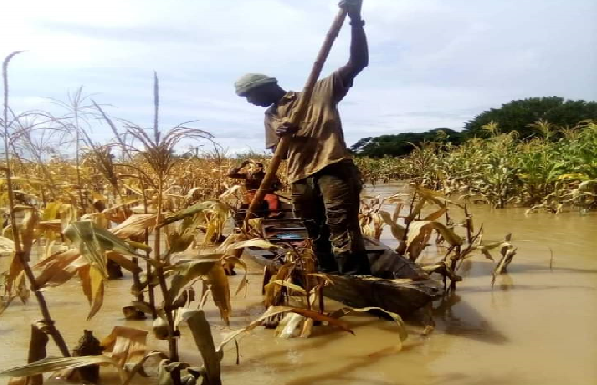 Two more persons have died in the floods in the North East Region. This brings to six the number of persons who have died so far.

The deceased, namely Amanita Adjei, 42, and Anaab Akumayini, 39, were said to have drowned last Saturday while using a canoe to salvage their crops that had been submerged by the floodwaters.

Days of downpour and spillage from the Bagre dam in Burkina Faso have resulted in massive flooding of areas down the White Volta.

Already, more than 1,000 people across the region are said to have been displaced, with large acres of farmlands submerged.

There are fears that the death toll could rise as the rains continue.

The National Disaster Management Organisation (NADMO) is still assessing the extent of the damage.

Some major towns and communities have also been cut off from the regional capital, Nalerigu, making it difficult for the inhabitants to access services at the capital.

The North East Regional Director of NADMO, Mr. Alhassan John Kweku, told the Daily Graphic last Sunday that some relief items had been organised for the victims.

He, however, said the continuous downpour was hampering all rescue operations and other interventions.

"Some relief items arrived from Accra on Sunday so we are currently putting things in place to see how we can distribute the items to the victims quickly to help alleviate their plight," he said.

It has been raining in the area for the past week and the spillage of water from the Bagre dam in Burkina Faso has worsened the situation.

Checks by the Daily Graphic revealed that a number of houses in Nalerigu and communities along the White Volta have been taken over by floods.

According to SONABEL, managers of the Bagre Dam, the spillage had become necessary due to the 81 per cent increase in the water level in the dam.

Residents close to the bank of the Black and White Volta were consequently advised to relocate to other communities for shelter and safety.

Meanwhile, the Water Resources Commission (WRC) has outlined immediate to medium and long-term plans to resolve perennial flooding in communities along the White Volta River basin that suffer the brunt of heavy rainfall and water spillage from the Bagre Dam.

A press statement signed by the Executive Secretary to the commission, Mr. Ben Ampomah, said it would embark on an exercise to dredge a cumulative distance of about 30 kilometres to help minimise the impact of the high flows in the White Volta River.

The exercise, he said, was expected to cover the upstream section from the border with Burkina Faso as well as upstream and downstream of the Pwalugu bridge, including the proposed Pwalugu dam site and upstream of the confluence of the Sissili river.

The exercise is estimated to cost GH¢29.6 million and will include dredging works, community engagements, restoration of dredged river banks, and documentary production.

Mr. Ampomah said a two-field reconnaissance survey carried out in May and July this year confirmed that extensive upstream sections of the White Volta River were shallow due to siltation.

The commission will be engaging with about 42 communities in the Bawku West and Talensi districts in the Upper West Region.