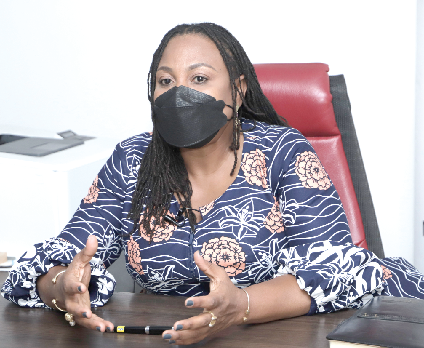 The Chairperson of the National Commission for Civic Education (NCCE), Ms. Josephine Nkrumah, has described the events in Parliament as a test of the country’s democracy.

She said it was a real test to determine how the country had matured as a democracy.

“What we are seeing between the Majority and Minority in this hung Parliament is part of the process of governance. It is part of both parties asserting what they believe to be their firm convictions for a better Ghana,” she stated.

Speaking on a wide-range of issues in an interview with the Daily Graphic, Ms. Nkrumah pointed out that Ghana was now a matured democracy having chosen the path of representative government for almost 30 years, stressing that “we are certainly no longer a fledgling democracy.”

On November 26, 2021, the Majority walked out of Parliament. In its wake, the 2022 Budget Statement and Economic Policy was rejected.

However, on November 30, 2021, the Majority rescinded the decision of the Minority to reject the budget by getting it approved.

At the time, it was only the Majority caucus which was in Parliament as the Minority had also staged a walkout.

An attempt by the Minority to reverse the decision of the Majority resulted in chaos on the floor of the House on December 1, 2021.

Ms. Nkrumah said the situation in Parliament “puts to the test the real motive and intention of parliamentarians as they represent the people for the collective good.”

She urged the MPs to let cool heads and consensus-building prevail.

That, she said, required compromises by both sides so that it becomes a win-win for all Ghanaians.

“And when it is a win-win in Parliament, it obviously becomes a win-win for the people of Ghana,” Ms. Nkrumah stated.

“But under these circumstances, our MPs should begin to sit down, negotiate, plan, give, take, lose some, win some and let that also trickle down to the people for them to say that, hang-on a minute; if our representatives in the House of Parliament, our law makers can compromise, can tolerate one another’s views with the objective of finding what best suits us in our journey, then we must also begin to find that as a way of co-existence,” she stated.

She said the situation called for a clear roadmap for a national development plan.

With that, she said, what would be needed or required would be the mechanisms and routes political parties while in government choose to take in arriving or journeying this roadmap to bring development to the people.

Ms. Nkrumah said that should encourage Ghanaians to participate in the country’s governance processes.

She said Ghanaians must begin to play a more prominent role in adding value to the governance system.

“It is not just about complaints, ranting and raving and seeking our rights. But we should also begin to look very critically at our responsibilities and duties as citizens.

“Our Constitution is quite clear that the rights that we enjoy are inseparable from the duties we have as citizens. So, you cannot want your rights and shirk your responsibilities. The two come hand-in-hand and we want to see that actually work,” she stated.