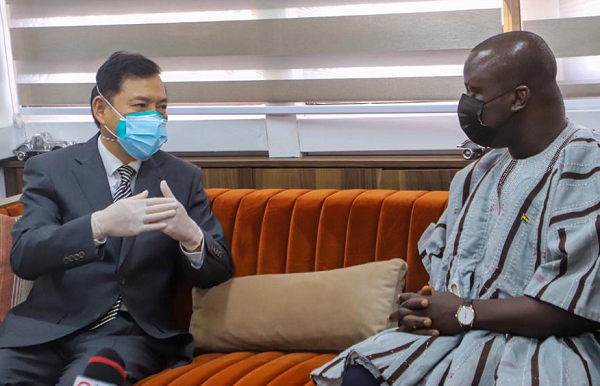 The Chinese government will not condone the participation of Chinese in illegal small-scale mining in Ghana.

Besides, the Chinese government did not approve the procedures some Chinese nationals and other foreigners used to mine.

The Chinese Ambassador to Ghana, Mr Lu Kun, who made this known, said: “They [Chinese illegal miners in Ghana] were neither organised by the Chinese government nor the embassy.

“They come by themselves,” he stated.

Paying a courtesy call on the Minister of Lands and Natural Resources, Mr Samuel Abu Jinapor, in his office in Accra yesterday, Mr Lu said: “Every country has its laws and should therefore protect its environment. This is very important.”

He said the Chinese government would support the government of Ghana to protect the environment.

The visit was to allow the two to familiarise themselves with each other and discuss pertinent issues bordering on small-scale mining, especially the involvement of Chinese in the business and how Ghana and China could work together to tackle the menace of illegal mining ( galamsey).

Mr Lu noted that Ghana was a land of gold for which it had remained famous for such natural resource.

He explained that it was because Ghana was attractive that some Chinese would want to live here and contribute to the economic growth of the country.

He, however, emphasised the commitment of the Chinese government to help Ghana deal with those who would breach the laws of the country and be “dealt with under the law.”

The Ambassador expressed worry that some of the Chinese participating in illegal mining were doing so because they enjoyed the cooperation of some local assemblies and chiefs, saying “this is the root and the problem.”

"So, we agree that our government should cooperate in dealing with this illegal mining,” he stated.

Mr Lu noted that every year, the Chinese government provided scholarships to many Ghanaian students to study in China for their undergraduate and postgraduate degrees.

"The Chinese government will pay them to let them study and pay for their stay in China. At this moment, Ghana has 6,070 citizens living and studying in China to get their degrees,” he said.

Mr Lu added that China and Ghana have had a very strong relationship for the past 61 years, a friendship that had seen China become a reliable partner to Ghana.

Apart from education, he said China had also supported Ghana particularly in the areas of economic and infrastructural development.

He particularly mentioned the construction of the Ministry of Foreign Affairs building, water projects, hydropower stations and other infrastructure projects as testament to the growing relations between the two nations.

Earlier, Mr Jinapor reiterated the government’s strong opposition to the participation of foreign nationals in small-scale mining in the country

“The mining laws stipulate clearly that foreigners are not to participate in small-scale mining but rather they are allowed to be involved in large-scale mining,” he stated.

According to the minister, everywhere in the world, foreigners were required to be law-abiding.

“We expect Ghanaians in China to obey the laws of China and conversely we also expect citizens of China to be law-abiding.

“At this stage, we can agree to be a little blunt that in the case of small-scale mining, some of our friends and brothers are actively involved and the law does not permit that,” he said.

Mr Jinapor particularly expressed worry that the methods that were being used to mine, especially the deployment of Changfang, was taking a heavy toll on water bodies and the environment in general.

“But I believe that if we work together as partners and cooperate, we certainly will be able to reduce the incidence of illegality in the small-scale mining industry,” he said.

He acknowledged that there were a number of decent Chinese in Ghana who were contributing to the development of the country.