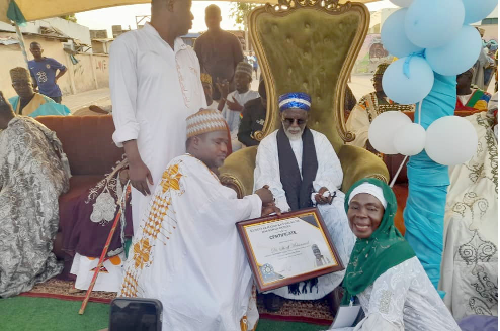 The Chief Imam, Sheikh Osmanu Nuhu Sharubutu, has been honoured for his enormous effort and contribution towards the promotion and education of the Hausa language and for his excellent leadership role as a Muslim leader.

He was honoured by the Haddin Kai Hausa da Hausawan Duniya Foundation, a global foundation for the promotion and education of the Hausa language and culture, with the position as the Garkuwa, which means the Chief of Staff of the foundation.

The event was held together with the handing over of new executives of the foundation.

Speaking at the event, the Public Relations Officer of the foundation, Mariam Sissy, said education was the primary tool for training and equipping the younger generation who would develop society when the unfortunate happened or there was a state of confusion.

“The neglect of the role of African culture in education and development is a major setback affecting our society today. If our society is to become self-reliant and self-sustaining in its development, then a realistic policy which situates development and process of education in the context of our language and culture must begin to be promoted,” she said.

She added that the foundation was concerned with the promotion of national identity, relevant skills and character development of the Hausa people, and a neglect of the language and culture was going to be grave and dangerous.

“Our education is not designed to promote creativity or an all-round development of the student but rather to process them, largely by rote, in order to acquire certificates that would qualify them for white-collar jobs. With its imitation of western cultural norms, values and standards education serves only to emasculate our indigenous cultures,” she added.

The President of the foundation, Mohammed Saeed, said there was a need for the Hausa community to come together as a unified body because that was the only way to bring progress and development to their community.

He urged all to desist from tagging Hausa people as non-citizens but rather welcome them as they were also citizens.

He also urged the Hausa community to educate and train the younger generation to know how to speak and communicate in the language as it was their pride.

The financial Secretary of the foundation, Suleiman Sheriff Idriss, also urged the newly appointed executive to do their best in unifying the community for development.