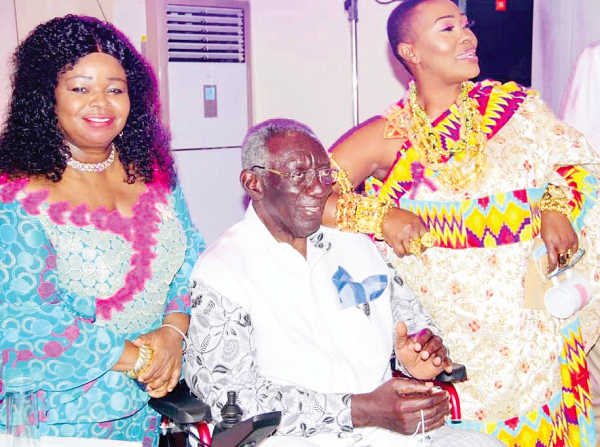 Former President John Agyekum Kufuor has called for increased efforts to break down the myths and misconceptions about breast cancer.

He said although there had been a lot of talk about breast cancer, there were still misconceptions about the disease in the public domain.

At a fund-raising dinner in Accra to raise funds to support the treatment of breast cancer patients in the country, the former President said already, the combined effects of science and research had countered misconceptions about the disease through proven methods of diagnosis, treatment and cure.

The fund-raising, the second this month, was organised by Breast Care International (BCI), a leading campaigner against breast cancer, as part of activities marking the breast cancer awareness month, which ends tomorrow (October 31).

The first of the two-tier event took place in Kumasi.

The Accra event was attended by several reputable institutions, both public and private, including the Ghana Gas Company and the Ghana Police Service.

This year’s theme for BCI’s Breast cancer Awareness Month, “Give Hope. Save Lives”, encourages individuals at the local levels to show support for breast cancer survivors, as well as those battling the disease.

Former President Kufuor, who is a strong supporter of the activities of the Breast Care International, said the breast cancer scourge was a scar on the conscience of mankind, particularly the developing world.

He said it was a matter of concern that breast cancer cases continued to rise and claim lives in developing countries.

Mr Kufuor stressed the need for the breast to be protected at any cost, if the human race is to be sustained.

This is because breast milk, which is “the cradle of life “ is produced from the breast.

The former President commended Breast Care International and its sister facility, the Peace and Love Hospitals, for the sustained campaign they had waged over the years against breast cancer.

He advised women to report cases promptly to hospitals for treatment.

Breast cancer is the most common cancer and the second most fatal cancer in women.

Dr Addai, a breast pathologist, who is also the Chief Executive Officer of the Peace and Love Hospitals, commended breast cancer survivors for their perseverance and will power, as well as selling the message that getting breast cancer did not signal the death knell of the patient.

He drove home the message that breast cancer was both curable and survivable.