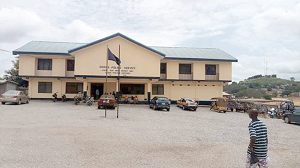 The Minister of the Interior, Mr Ambrose Dery, has inaugurated a district police headquarters at Agogo in the Asante-Akyem North District in the Ashanti Region.

The facility was financed by the chiefs and people of Agogo at a cost of GH¢1 million.

The one-storey building has 14 furnished offices and a conference room. There are also male and female cells and juvenile cells with water closets and showers.

The late New Patriotic Party Member of Parliament (MP) for the area, Mr Kwadwo Baah-Wiredu, initiated the project in 2008 and the Omanhene of the Agogo Traditional Area, Nana Kwame Akuoko Sarpong, provided a one-acre land for its construction.

Mr Dery commended the people of Agogo for the unity of purpose that brought about the project’s actualisation.

He thanked the chiefs and people for their sense of commitment and dedication and expressed the hope that the people would maintain unity in efforts to develop the area further.

The Asante-Akyem North District Chief Executive (DCE), Mr Francis Oti Boateng, said the stations opening would help in the fight against crime and the maintenance of law and order in the district.

Mr Boateng commended the Agogomanhene, the chiefs, Agogoman Mma Kuo, the entire Agogo citizenry and the Asante-Akyem North District Assembly for demonstrating the spirt of communalism and urged them to sustain the effort.

He said the assembly, in collaboration with the MP for Asante-Akyem North Constituency, Mr Andy Appiah-Kubi, was working assiduously to ensure that the district had more infrastructure to enhance the well-being of the people.

The DCE appealed to the Ministry of the Interior to construct new police posts or stations at Ananekrom, Pataban and Abrewapong and also help renovate existing facilities at Juansa and Akutuase.

The Ashanti Regional Minister, Mr Simon Osei-Mensah, said the region had peace and order as a priority and, therefore, thanked the Agogo community for coming together to construct the new police station.

He urged them to continue to live in unity as it was the only way they could develop the area rapidly.

David Asante-Apeatu, urged the police to ensure to maintain the structure regularly in order to prolong its lifespan.

He further urged the police to be swift and diligent in its dealings with security issues in the district.

Mr Oppong-Buanuh also advised the residents to desist from acts of hooliganism and not attack the police or destroy police property, adding that: "The police recognises every caller or person as a potential ally" and would do everything possible to ensure that the people were safe and secure.

The Omanhene of the Agogo Traditional Area, Nana Kwame Akuoko Sarpong, who chaired the function, thanked all who contributed to the construction of the police station and urged the people to exhibit similar traits in other undertakings at Agogo and the district at large.