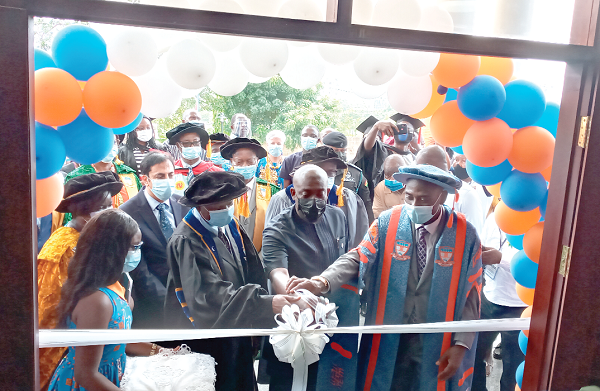 Mr Kojo Oppong Nkrumah (middle) being assisted by Prof. Kwamena Kwansah-Aidoo (right), Rector of GIJ, to cut the tape to inaugurate the building complex on the institute’s new campus located at Dzorwulu in Accra
30.5k Shares

The Ghana Institute of Journalism (GIJ) has made a proposal to Parliament to amend the University for Film, Journalism and Languages Bill, 2020 currently before the august House.

The bill seeks to merge GIJ, the National Film and Television Institute (NAFTI) and the Ghana Institute of Languages (GIL) into a fully fledged university of communication studies.

However, the Rector of GIJ, Professor Kwamena Kwansah-Aidoo, said although the institute was in support of the merger, there was the need to amend some provisions in the bill.

"We are not enthused with the proposed name for the university so we are asking for the name to be changed. We have recently made our submissions to the Parliamentary Select Committee on Education and made some suggestions which we believe will improve the bill," he said.

Prof. Kwansah-Aidoo was speaking at the 14th congregation and inauguration of a building complex on the institute’s new campus located at Dzorwulu in Accra yesterday.

The Minister of Information, Mr Kojo Oppong Nkrumah, who was the Guest of Honour, joined Prof. Kwansah-Aidoo to cut the tape to open the building for academic work.

The first session of the three-part congregation, which took place at the new campus, saw 325 students who completed their four-year Bachelor of Arts (BA) in Communication Studies (Journalism option) receive their certificates.

They formed part of a total of 1,232 students who are expected to graduate between yesterday and today.

Prof. Kwansah-Aidoo said the move by the government to merge the three institutions was a major decision that would help create synergies and improve communication studies in the country.

"We at GIJ are in full support of the bill because we believe it will provide significant opportunities to build on the synergies offered by the component institutions, while safeguarding the history and identity of each institution," he added.

The rector gave an assurance that GIJ was putting in place the right structures and infrastructure to leverage the opportunities emanating from the merger.
While commending the government for supporting the institute to complete its new building, Prof. Kwansah-Aidoo appealed for more funding for other projects, including lecture halls.

Mr Oppong Nkrumah commended GIJ for leading the way in the training of communication professionals in the country.

He gave an assurance that the proposal for amendment to the proposed university bill would be considered once the submission had been tabled in Parliament.

The minister said the government was committed to ensuring that the merger was properly done to promote communication education in the country.

"We are expecting higher numbers of graduates of the free senior high school most of whom would seek admission to tertiary institutions, including GIJ, and I can assure you that President Nana Addo Dankwa Akufo-Addo is committed to helping you get the needed infrastructure," he said.

The minister advised the graduates to put the skills they had acquired to good use and also avoid following the bandwagon.

Mr Oppong Nkrumah said in an era where the face of business was fast changing through technology, there was the need for communication students to blend hard and soft skills to make the desired impact on society.

He further urged them to work their way to success in the media industry and avoid the temptation to defame others or cut corners because “cutting corners to get quick wealth may pay off temporarily, but it will end in shame.”