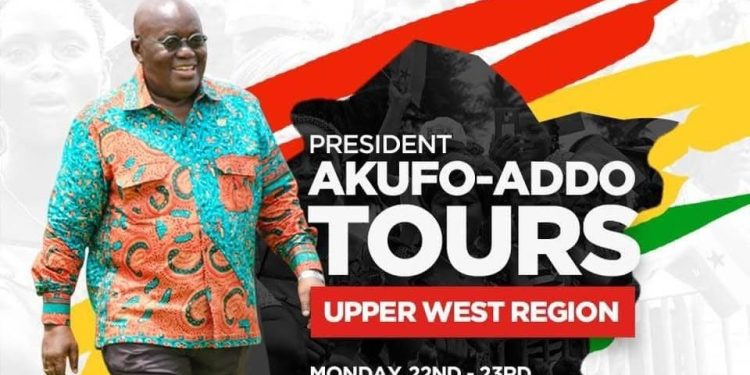 As part of his itinerary, he will be inspecting ongoing projects and cut the sod for the construction of some roads in the area.

He will also have an interview on Radio Upper West, after which he will pay a courtesy call on the Wa-Na.

President Akufo-Addo would depart Wa to Lambussie to inspect the Agenda 111 Project and then to Nandom to pay a courtesy call on the Nandom Na, have a radio interview, after which he will cut the sod for the dualisation of the Nandom Town roads.

He is expected to return to Wa in the evening for a meeting with Metropolitan, Municipal, and District Chief Executives (MMDCEs), regional executives of the governing New Patriotic Party (NPP) as well as constituency chairmen.

He would also visit Kaleo and Wechiau to commission the Kaleo Solar Power Project in the Nadowli-Kaleo Constituency and inspect Agenda 111 projects at Wechiau in the Wa West Constituency, then depart to Damongo, the capital of the Savannah Region.