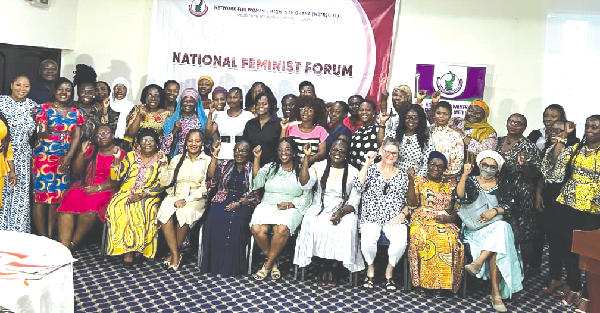 Participants in the forum
30.5k Shares

However, she says for the country to seize this opportunity effectively, gender equality must be mainstreamed into all of Ghana's development policies.

Mrs Akakpo, who is also the Head, NETRIGHT Secretariat, said this at the opening of a two-day National Feminist Forum organised by NETRIGHT and supported by Plan International Ghana, with funding from Global Affairs Canada (GAC) under its Women’s Voice Leadership (WVL) Project.

The forum, the third to be organised in the last three years, was on the theme: “Enhancing Activism in the Women’s Movement: Mobilising for Inclusion and Diversity”. It brought together feminists from across the country to deliberate on issues of key concern to women and girls.


Mrs Akakpo said the socio-cultural and economic well-being of women, who made up 50.7 per cent of the nation's population, could not be taken for granted if Ghana wanted to ensure an all-inclusive developmental growth, adding that gender equality and women's rights remained not only a moral imperative but also a pragmatic priority for effective and sustainable development.

The Project Lead, WVL, Patricia Essel, in a brief remark, said a strong women’s movement was a step in the right direction towards achieving Plan International’s current global strategy which was “All Girls Standing Strong Creating Global Change”.

She said as a humanitarian organisation, plan international strived for a just world that advanced children's rights and equality for girls and young women with a focus on gender transformative programming.

She said when Women’s Right Organisations (WROs) came together, “they will be able to achieve a world where all girls and women know and exercise the rights to living the life they choose, as well as a network of supporters, communities, staff, partners and donors all supporting girls and young women to stand strong as they learn, lead, decide and thrive.

A Representative from UN Women, Tolulope Lewis-Tamako, in a remark, also said the work of women's movement across the world continued to be unappreciated and undervalued.

She called for predictable and accessible funding for the work of the women’s rights movement, as well as the protection of women’s rights defenders across the world.

The Convenor, Women's Manifesto Coalition, Hamida Harrison, in a presentation on “Advancing Women’s Rights and Gender Equality in Ghana: The journey so far”, said although there had been some successes in the women’s movement such as the passage of the Domestic Violence Act and the drafting of the Women’s Manifesto, there still existed multiple and systemic impediments.

She said at the national level, they were yet to see a total enabling environment to advancing women’s rights in the country.

According to her, the capping of gender, children and social protection might have crowded the space and attention to women empowerment and gender equality in the country.