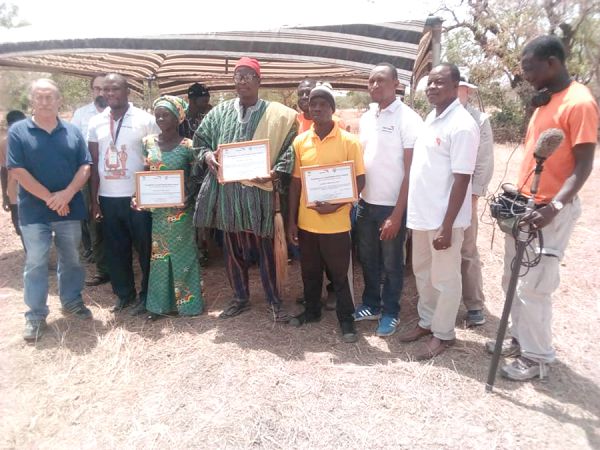 Some of the award winners displaying their prizes
30.5k Shares

Seven hundred and fifty hectares of degraded lands in 57 communities in the Talensi District in the Upper East Region have been restored.

Additionally, over 3,000 farmers from the beneficiary communities have been introduced to hybrid crop varieties that are high yielding, early maturing and drought resistant to enable the farmers improve on their incomes.

These were made possible through the implementation of a Farmer-Managed Natural Regeneration (FMNR) project by World Vision Ghana since 2009.

The project, which is being financed by the Australian Government, is a low cost land restoration technique that combats poverty and hunger among subsistence farmers by increasing food, timber production and resilience to extreme climatic conditions.

The Regional Operations Manager of World Vision Ghana for the Northern sector, Mr Timothy Akanpabadai, made this known at a durbar in Tongo-Beo, one of the beneficiary communities, to welcome back Tony Rinaudo, an Australian who championed the FMNR projet.

Winners of a Beating Famine Conference held recently in Mali in which World Vision Ghana and the beneficiaries won four awards out of 10, were also acknowledged.

Mr Akanpabadai disclosed that the FMNR project, which started in four communities in 2009, was now benefiting 1,200 farmers.

He further explained that 1,500 farmers had been trained on cowpea storage techniques to store seeds and crop produce for longer periods.

While adding that the project had partnered with state institutions such as the Ministry of Food and Agriculture and the Ghana National Fire Service to train 2,500 farmers on soil fertility improvement and provided 1,200 fire volunteers with logistics to control wildfire respectively, he said, it had also trained and supported 640 farmers on modernised bee keeping.

Mr Akanpabadai further stated that the intervention had also led to the restoration of degraded lands, re-greening of the environment, prevention of bushfires and deforestation, increased crop and livestock production among others to  ensure food security and poverty reduction.

He, therefore, called on all stakeholders, including traditional authorities, development partners and district assemblies to adopt the FMNR approach to enhance food security systems and sustainable agriculture.

He, however, appealed to the organisation to scale up the project to benefit more communities.

The chief further entreated other individuals and organisations to provide the community with a dam or dug out for their animals, especially during the dry season.

A beneficiary and one of the winners of the Beating Famine Conference in land restoration, female category, Madam Cecilia Topok Saparoug, said the project had helped to preserve the thatch grass they used in roofing their homes.

She said the project had also enabled medicinal trees to be preserved.