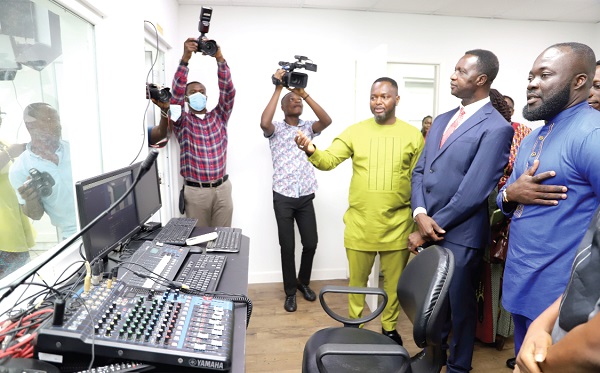 Nana Gyamfi Adwabour (hand raised), Executive Director of the Centre for National Distance Learning and Open-Schooling, explaining a point to Dr Yaw Osei Adutwum (2nd from right), Minister of Education, during an inspection of the studio facility in Accra. Those with them include Kwaku Abaka-Nyarko, Studio Manager of CENDLOS, and other officials. Picture: GABRIEL AHIABOR Follow @Graphicgh

Distance learning at the pre-tertiary educational level has received a boost with the inauguration of five ultra-modern studios at the Centre for National Distance Learning and Open Schooling (CENDLOS) in Accra.

The studios are to be used for the generation and transformation of manual lessons into digital content for pupils and students from the basic to the senior high school level.

The facilities would also be used to support the operations of Open University and college systems of education in the country.

The Minister of Education, Dr Yaw Osei Adutwum, who inaugurated the facility, said it was important that the country’s education was being enhanced to favourably compete with other educational systems in the rest of the world.

Compared to other countries, he said Ghanaian students were more calm, respectful and willing to learn.

"From my experience as a deputy minister and now the substantive, invariably what I see is the poor utilisation of resources that are available to us. You build a school and open it without thinking that the laboratories should be completed before students move in," the minister said.

He said that Science, Technology, Engineering and Mathematics (STEM) schools in the country such as the Bosomtwe Girls High in the Ashanti Region were now ahead of the educational curve because of their robust facilities and equipment.

"So as we build new schools we need to cover lost grounds. When we cover the lost grounds then we look at how we can transform existing schools. What we want to do is to make sure Ghanaian students are competitive and we cannot be competitive in the 21st century unless we integrate information technology into the education system," the minister added.

“There are many steps in content creation — from the idea stage, design stage, pre-production, production and post-production stages. These studios here will cut short the processes and do everything in-house,” he said

Nana Adwabour added that the studios would have an end-to-end solution to create more content from the kindergarten to the senior high school and tertiary levels, including the open university system which is about to be enrolled.

The Country Director of Plan International, an NGO, Solomon TesfaMariam, said his outfit was pleased to partner the Education Ministry and other stakeholders to equip schools with the needed resources for quality education.