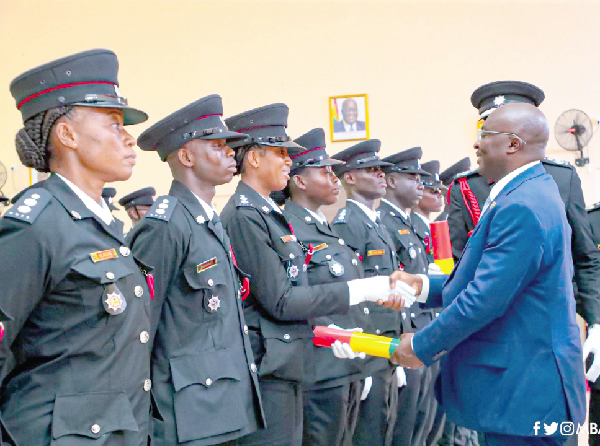 Four hundred and forty-three officer cadets, made up of 263 males and 180 females have been commissioned into the officer corps of thec during a ceremony at the Fire Academy and Training School yesterday at James Town in Accra.

The Vice-President, Dr Mahamudu Bawumia, who was the reviewing officer, commended the GNFS for being very innovative in their efforts to ensure that the service offered rescue, evacuation and fire protection and management services to Ghanaians.

He also thanked the personnel for giving up the comfort of civilian life, stepping up and for putting on the firefighter uniform, saying “thank you for the risks you have accepted and the sacrifices you will make because you have chosen to serve in this noble service.”

The newly commissioned officers, as part of the ceremony, treated guests and the dignitaries, who included the Minister for the Interior, Ambrose Dery; Chairman of the Fire Service Council, Kwame Anyimadu-Antwi, and the Member of Parliament (MP) for Odododiodio, Nii Lante Vanderpuye, to some slow and quick march with music from the Fire Service Band.

Also present were family and friends of the graduating officers.

The deserving graduating officers were rewarded for their excellence, with the Overall Officer Cadet going to Darling Naa Norkor Yeboah.

While stressing the demand for safety in our daily lives and the important role of the fire service in the day-to-day activities of the people, Vice-President Bawumia said the fire service was expected to focus on promoting fire safety, protecting people and property from fires; rescuing people from road traffic accidents and entrapment from heights and depths as well as dealing with other emergencies.

He gave the assurance that the government would continue to equip the various security agencies, including the GNFS to perform their duties.

To demonstrate that, he announced that the government had provided two-storey dormitory blocks, one single-storey dining hall and a three-storey classroom block at the Fire Academy and Training School to be inaugurated soon.

The Vice-President further said plans were also advanced to deliver other equipment, including fire engines and rapid intervention vehicles for the service next year.

“Government is keen on the human resource and developmental leadership of the fire service and would continue to provide personnel, training, necessary equipment and other logistical support to make the service more effective in delivering fire and rescue services to the people. The government has already approved the recruitment of 2,000 personnel into the service to augment its manpower strength and these graduating cadets form part of the approved number,” he said.

He further charged the graduating officers to bring their expertise to bear to address some of the significant challenges in safety such as people being trapped and burning to death in their own homes, saying, “your values as a fire service officer and your personal values should inspire you to help people in need of your services.”