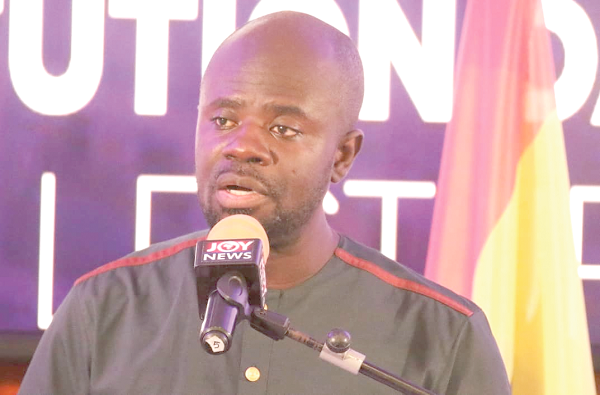 The Dean of the Faculty of Law at the University of Professional Studies, Accra (UPSA), Dr Ernest Kofi Abotsi, has said there is no need for a review of the Constitution as a way of  fine-tuning it to serve emerging challenges.

He described the 1992 Constitution which birthed the Fourth Republic as 95 per cent perfect and said the problem with it had to do with the actors and not the letter (text) of the document.

Dr Abotsi said the failure of the actors, consisting of elected and appointed persons, heads of state institutions and people who run the day-to-day affairs of the country, to execute their constitutional mandate made it difficult to appreciate the full potential of the Constitution.

“Although there are few instances in the Constitution which need to be relooked, generally I think the 1992 Constitution is 95 per cent okay. The real test is the ability of actors to apply the Constitution in the manner it is intended to be applied,” he added.

Dr Abotsi was speaking at a public lecture to commemorate Constitution Day organised by the OneGhana Movement, a not`-for-profit social action organisation, and the UPSA Law School in Accra yesterday.

It was on the theme: “Realising the 1992 Constitution beyond elections: Citizenship, public goods and inclusive governance”.

The maiden edition of the lecture interrogated pertinent issues in the Constitution and also deliberated on the way forward for Ghana’s development.

Dr Abotsi said over the past decades there had been increasing calls for a review of the Constitution.

“But it is important to point out that these calls may be a pretext to shift blame for the actual failing in constitutional development, resulting in the setting up of a commission to investigate the need for a review of the Constitution.

“While I am in no means suggesting that the Constitution is perfect and needs no change, I argue that this subject of constitutional review has been over-stated and the mechanism of review has been exploited to explain failings which remain attributable to officials of state,” he said.

According to him, the fact that the architecture and complexity of the 1992 Constitution could compare favourably with standards or model constitutions in the world made the case for its aggressive review even more counter-intuitive.

“All the advocates of constitutional review are blinded to one dangerous prospect of just any exercise of reforms, forgetting that the review can be used to water down the liberty and enhance the powers of the government,” he added.

An entrepreneur and legal practitioner, Mr Elikem Kuenyehia, who chaired the event, expressed worry about the recent ‘unparliamentary’ conduct that engulfed the inauguration of the eighth Parliament on January 7, this year.

“Last Thursday, I had to bow my head in shame when I saw some of our parliamentarians acting in a ‘barbaric behaviour’ in the Chamber of Parliament,” he said.

Mr Kuenyehia urged the new leadership of Parliament to apply disciplinary action in the House equitably to persons involved in the misconduct to serve as a deterrent.

He commended Dr Abotsi for his presentation.

A board member of the OneGhana Movement, Mr Mensah Seneadza, said the Fourth Republic, the most enduring democratic dispensation of the country, was founded on the 1992 Constitution which set out Ghana’s collective and individual rights and aspirations towards development.

“As is vital for every good project, a candid review is essential to ensure that lessons are learnt and progress made over the past years.

“The lectures, therefore, seek to interrogate pertinent issues in the Constitution and chart the way forward for Ghana’s development, as intended by the framers,” Mr Seneadza added.