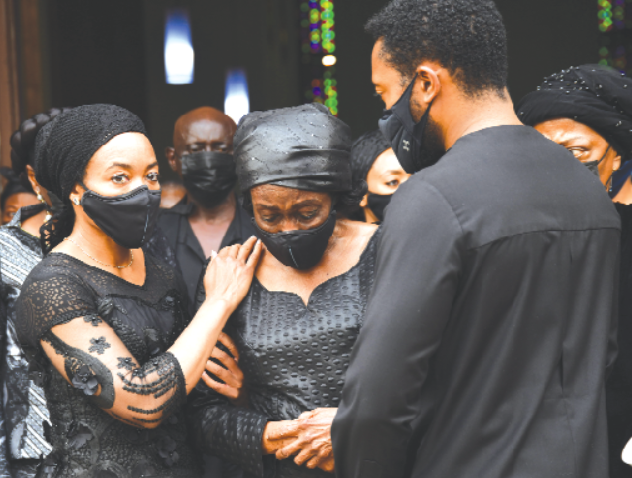 Ghana plunges into full-scale mourning from today as its citizens and mourners from the rest of the world begin paying their last respects to the late former President Jerry John Rawlings, 73, in a state funeral, which will last until Wednesday, January 27.

The body of the former President is to be laid in state at the Accra International Conference Centre (AICC) from this morning for mourners to file past.

The mood of the nation, especially in the capital, Accra, where the funeral is taking place, is nothing but sombre.

Today’s filing past is reserved for heads of the security agencies, leaders of political parties and the public.

Tomorrow, the filing past will start with President Nana Addo Dankwa Akufo-Addo, Vice-President Mahamudu Bawumia, former Heads of State, as well as heads of constitutional bodies.

Members of the Diplomatic Corps and organised groups will also pay their respects on Tuesday.

Massive preparations have gone on for the funeral of the man who ruled Ghana twice as a military leader — first from June 4 to September 24, 1979 and then from December 31, 1981 to January 6, 1993 — before transitioning into a democratically elected President on January 7, 1993, following his victory in the presidential election earlier in November 1992.

The AICC, where the body has been laid in state for public viewing, has been beautifully decorated, while the Black Star Square, where a military burial service will be held on Wednesday, is getting ready to receive the anticipated thousands of mourners, including world leaders.

A visit by the Daily Graphic to the two venues yesterday revealed workers putting final touches to preparations to get the places in order.

At the AICC, for instance, the foyer, where the remains of the late President will be laid in state, was ready.

A glass compartment containing the catafalque was in place, waiting to receive the body.

Two large photographs of the late President, one showing a smartly dressed Air Force Officer and the other the man in civilian attire, had been placed at two opposite ends of the compartment.

Former President Rawlings was synonymous with the Air Force, having trained as an Air Force officer and spent 11 years working at the Air Force Base before he led the June 4, 1979 Uprising, as a Flight Lieutenant, to topple the General F.W.K. Akuffo-led Supreme Military Council 2 (SMC 2) government.

There are other photographs of the former President at the left and the right sides of the main entrance of the foyer of the AICC.

Significantly, the AICC, an edifice built by Mr Rawlings’s PNDC administration and which he inaugurated on August 9, 1991, is the same place where his body has been laid in state before interment on Wednesday.

The photograph on the right side of the entrance of the foyer shows a young Rawlings holding a microphone during the revolutionary era with the caption: “Watchdog for the Ordinary Ghanaian”, while the one on the left shows Rawlings on a horse at the Accra Stadium, with the caption: “Enigmatic”.

A red carpet has also been laid on the main stairs leading to the entrance of the AICC.

At the Black Star Square, black canopies had been erected at the time of the Daily Graphic visit, while workers of Jandel Company, which is in charge of the set up, were seen busily putting in place other facilities.

Chairs had been arranged at various points and eight giant screens had also been mounted.

The General Manager of Jandel Limited, Mr Sumaila Salifu, told the Daily Graphic that 60 per cent of the works had been completed as of 10 a.m. yesterday.

He said judging by the pace of work, 90 per cent “of the job will be done today and 100 per cent on Tuesday before the final funeral rites on Wednesday”.

He said the company started setting up the place last week because the fixing of the trusses took time.

President Rawlings passed away at the Korle Bu Teaching Hospital on November 12, 2019, after a short illness.

His remains will be entombed at the Military Cemetery at the Burma Camp in Accra.