Ghana Institute of Foresters cautions against de-classification of Achimota Forest 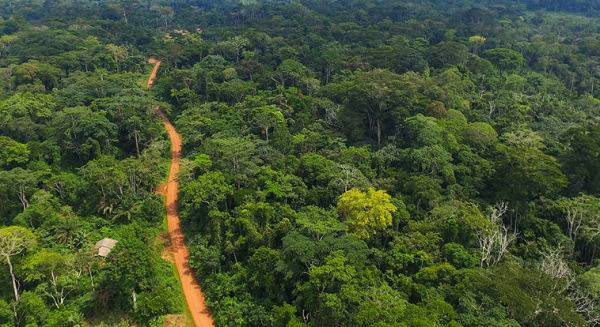 The Ghana Institute of Foresters (GIF) has asked the government to withdraw Executive Instrument (E.I. 144) that de-classified some portions of the Achimota Forest in the southern peripheries as a forest reserve.

If this happens, it could cause the country to lose more urban forest reserves.

The President of the GIF, Professor S.K. Oppong, argues that if the government de-reserve part of the Achimota Forest to its owners, there was no way the government could say no to other families whose lands had been turned into forest reserves.

Below is a copy of GIF's press statement

GHANA'S URBAN FORESTS ARE DISAPPEARING AND WE MUST BE CONCERNED

In the wake of the public outcry following the Government's de-reservation of a portion of the Achimota Forest Reserve through an Executive Instrument (E.I. 144), the Ghana Institute of Foresters (GIF) wishes to draw attention to a bigger problem facing Ghana's urban forests and why we should all be concerned.
The associated issues that have necessitated the issuing of this release by the GIF, are as follows:

2. As our towns and cities continue to expand, it is only a matter of time that many more of our forest reserves will transition into the urban precinct, and become subjected to the infrastructural development threats the present urban forests face.

3. To be fair to the actors who encroach on urban forests for infrastructural aspirations, urbanization can increase the economic value of land so much that it could look economically irrational to continue to have such high value lands under uses that do not generate substantial economic returns. Obviously, the economic benefits that can be obtained from an acre of urban land under infrastructural investment such as housing, hotels and restaurants, far outweigh the tangible economic benefits that can be obtained from the land if put under traditional forestry or agricultural use. The flaw in this line of reasoning however is that it assumes that development is all about economic gains. But there is consensus among development experts that development is only truly sustainable when it also addresses social and environmental concerns.

4. The big question then is: do the Achimota forest and the many other threatened urban forests of Ghana offer any vital environmental benefits that warrant them being maintained as forest lands in the urban landscapes? The simple answer is YES, and we justify this stance with only one of the many environmental services that urban forests provide, as it is one we can all easily relate to. Our urban areas continue to have increasing number of vehicles. Being mostly fossil-fuel powered, these vehicles continuously emit polluting fumes into the urban air. You may have heard of instances where people have died from fume inhalation because they left their generators working inside their rooms, while asleep for fear of theft. The fumes that the many cars in our urban environments emit on daily basis are not good for us. But the average car user is not really bothered about the fumes from his/her car, because even the visible dark smoke from badly maintained cars appear to disappear once it gets emitted into the urban atmosphere. Do these fumes from these many cars really magically disappear? The answer is no. It merely diffuses into the urban atmosphere and forms part of the urban air we breathe. But we do not suffer the fate of the persons who kept running generators inside their rooms because the emissions do not cause much harm to our health, when the concentration in the urban air is kept within limits. Now, how do we keep the concentration of vehicular emissions in the urban air within limits with our ever increasing number of vehicles? That is where urban forests become indispensable. They do an amazing job of absorbing huge quantities of pollutants from the urban air and in return contribute huge quantities of precious oxygen. They help clean up the urban air we pollute on daily basis. Without this important role that urban plants play, our urban air may have become unsafe to breathe by now. It is already happening elsewhere: Chinese cities have been known to have alarmingly high levels of air pollution, with effects that include over 1 million premature deaths in 20191. The Chinese Government is aggressively addressing the urban air pollution problem through measures that include prohibition on new coal-fired plants and shutting down of old plants in the most polluted regions; restriction on number of fossil-fuel powered cars on urban roads and active promotion of electric cars; and aggressive urban tree planting through which an estimated 35 billion trees have been planted across 12 provinces2. Do we in Ghana want to reach that level of urban air pollution to start appreciating the very vital air cleaning roles our urban forests play?

5. We should all be worried with the Government's de-reservation of portion of the Achimota Forest Reserve for several reasons. This action converts a public forest land into private lands subject to any private use. While urban forests play vital environmental services as explained, these services are largely intangible and not easily converted into monetary value. Nobody buys clean air in Ghana, at least not until the urban air becomes so polluted and unsafe that people would resort to breathing from purchased air bottles. Again, such an environmental forest service is a public good that cannot easily be privatized. Therefore, though highly essential for our wellbeing, there is no motivation for any rational private person to put his/her private urban land under traditional forestry land use when more money can be made from putting it under infrastructural investment. This explains why the remaining urban forests are mostly on public lands or communal lands. It is therefore imperative to keep the urban forests as public lands to safeguard the vital environmental services they provide.

7. The process employed for the de-reservation and the reasons given are troubling and raise several questions. Present day legal regime for Ghanaian forestry require that even Timber Utilization Contracts (TUCs) granted to timber companies for the harvest of specified quantities of timber should be ratified by Parliament. So how can a matter as serious as de-reserving a portion of a gazetted forest reserve be left to only the Executive arm of Government for determination? The de-reservation as communicated in E.I. 144 draws it legitimacy from CAP 157 (Forest Ordinance of 1927). E.I. 144 refers to CAP 157 as an Act. It is important to note that it is originally an Ordinance, as there was no Parliament in 1927 as we have today. An Act of Parliament ranks more supreme than an Ordinance which can be made without Parliamentary ratification. CAP 157 in its original sense gave the then colonial Governor powers to establish forest reserves and to declare them no more forest reserves through Executive Instruments. The question is: why would our democratically-elected President exercise such a colonial legislative provision that has obviously lost its place in our present democratic dispensation? Clement Kojo Akapame of the GIMPA Faculty of Law draws attention to a conflict between this colonial legislative provision and a provision of a newer Act of Parliament, the Land Use and Spatial Planning Act, 2016 (Act 925). Act 925 requires Parliamentary ratification for rezoning or change of use of a public space. Which provision reigns higher, the provision of Act 925 which requires Parliamentary ratification for such actions as de-reservation of a forest reserve or the colonial CAP 157, which authorized the colonial Governor to de-reserve a forest reserve without parliamentary ratification because there was no parliament in those days?

8. The main reason given for the de-reservation is that pre-reservation owners (named as the Owoo family in E.I. 144) have requested for portion of the forest land because they have not been compensated. This explanation does not sit well within the legal framework for Ghana's forests because dedicating an area as a forest reserve does not change the ownership status of the land (particularly when no compensation has been paid, as in the case of the extended portions of the land that were acquired later for a woodlot.

The land remains the property of the pre-reservation owners. Only the management shifts to the. designated Government authority (Forestry Commission). This explains why portions of revenues made from our forest reserves go to the land owning authorities as royalties. How can the pre-reservation owners of the Achimota forest reserve request to be compensated if they remain the owners of the land?

Has this fact been made known to the Owoo family and has the family received royalties from any revenues generated from the forest? If the owners have never received royalties from any revenues generated from this forest, then this is where the real injustice to the owners has been, and which needs to be addressed. With the agenda to establish an Eco-park in the reserve; has the family been made aware that they would be entitled to portion of the revenues that would be generated from the Eco-park? Could this vital information change the stance of the Owoo family on claiming portion of the reserve land?

9. Furthermore, the de-reservation of portion of the Achimota Forest Reserve is troubling because it is setting a very precarious precedence.

With most of Ghana's forest reserves having not been compensated for, what happens if the owners come forward to demand that portions be released to them? How can the Government say no when the Achimota forest request has been granted? The owners have a case to cite when they initiate legal actions to demand their land. It is actually happening already with the Dede Forest Reserve in the Eastern Region where the owners are presently in court to demand compensation.
Against the points raised above, the Ghana Institute of Foresters calls on the Government to, as a matter of urgency, withdraw E.I, 144 that de-reserved portion of the Achimota Forest Reserve. There are ways to generate revenues from the forest, while maintaining its ecological integrity. In its present state, no significant revenue is being generated to benefit the owners. However, the proposed Eco-park idea is one that can raise revenue. Let us seriously explore such avenues to generate revenues from the forest, from which royalties can be paid to the owners so that it becomes a win for every interest in the land — the owners, Accra's air quality, public space for leisure and other activities, ecotourism, biodiversity conservation, Ghana as a nation and indeed the world at large.

As a nation, posterity will judge us all if we allow the private interests of few actors to override the common public interests in the Achimota forest.