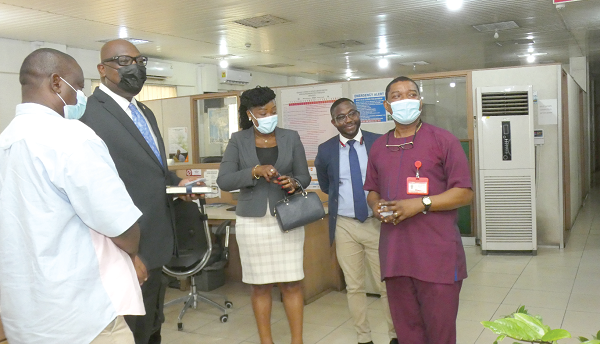 The American Chamber of Commerce (AMCHAM), Ghana and the Graphic Communications Group Limited (GCGL) have committed to deepening the ties between them, with the aim of projecting Ghana as the best destination for American investments.

Leveraging the peace the country enjoys and its economic progress, the two sides also agreed to showcase the works of American companies which were in business and their contribution to growth in all sectors of the Ghanaian economy.

These came up when the Executive Secretary of AMCHAM, Simon Madjie, led a two-member delegation to pay a courtesy call on the Editor of the Daily Graphic, Kobby Asmah, in Accra yesterday.

Present at the meeting was the acting Editor of the Graphic Business, Charles Benoni Okine, and the Membership, External Relations and Project Manager of AMCHAM, Ghana, Jane Okyere-Aduachie.

Welcoming the AMCHAM delegation, Mr Asmah recalled the long-standing relations between the GCGL and the American Embassy, as well as American companies which had investments in the country.

He said as the media channel of choice, the Daily Graphic, the flagship newspaper in the GCGL stable, and its sister papers had chosen the path of reporting the news based on truth and accuracy.

“We are the conscience of the nation and that is a huge task bestowed on us. Our survival for the past 70 years and more is a testament to our commitment to the nation and businesses all over and we pride ourselves in that,” he said.

Mr Asmah said having existed from the pre-independence days, the GCGL had chronicled the history of the country, hence its project to digitally archive all the events covered by its newspapers since 1950 for Ghanaians and the world to appreciate Ghana’s journey.

“We have all the news about the days of independence, through the various military regimes, and there is no better place to know the story than what has been told by the Daily Graphic.

“This massive project will soon be out and can be accessed online for people to know what the real stories are about the country’s journey,” he said.

He also mentioned the Ghana Year Book, which chronicles the various key events and information about companies, embassies, among many others, in a particular year, adding that “the 2021 edition will be out on the stands in due course”.

The Executive Secretary of AMCHAM said after the COVID-19, every country would struggle to bring in investments, for which reason a collaboration was necessary for the dissemination of accurate and reliable information to help make Ghana the preferred destination for United States (US) investments.

“The GCGL has been a major partner for us, and all our companies rely on the Daily Graphic as a voice to speak to the nation and bring the government’s attention to many of the issues that confront the people,” Mr Madjie said.

The goal of AMCHAM, he added, was to promote trade and investment, as well as education and cultural ties between Ghana and the US.

“We will also be engaging the government and stakeholders to bring to the notice of Ghanaians work done by US companies, which is not only about employment and the payment of taxes but also training, the exchange of technology, the provision of health care and also sending Ghanaians to the US to understand the culture,” Mr Madjie added.