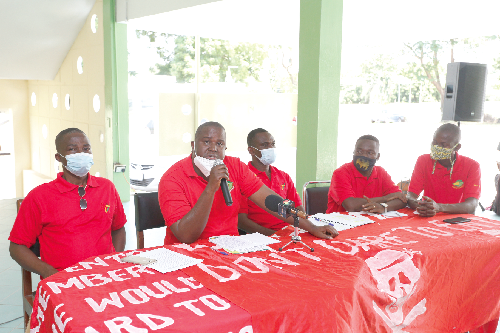 The Unionised Staff Association of the Ghana Broadcasting Corporation (GBC) has warned that it will resist any moves by the management of the Ghana Revenue Authority (GRA) to take over its Old House lands located around the Jubilee House.

The union indicated that the corporation was a public service broadcaster which was clothed with statutes on how to dispose of its assets.

It has, therefore, called on the National Media Commission to stop the ongoing grading and preparation works on the land by the GRA.

The Divisional Union Chairman, Mr Sam Nat Kevor, recounted at a press conference in Accra that barely a week ago, the union picked an intelligent report that some encroachers had taken over the land.

After some investigations, he said it was discovered that the site was being cleared for the construction of a GRA office.

Mr Kevor said the union, therefore, confronted the Director and Deputy Director who denied any involvement but revealed that a letter from the Ministry of Finance had been copied to them stating that the land had been taken.

He said they also mentioned that they were handicapped in reclaiming the land due to the new Land Act 2020.

Mr Kevor stressed that the company was not an agency or department under the Ministry of Finance and, therefore, it didn’t have the power to direct or make any attempt to carve away any property of the GBC.

He alleged that the GRA had vast lands near the Ministry of Foreign Affairs and could equally make use of such prime land for whatever it deemed fit, and not expropriation of GBC lands.

“We want to put on record that the attempt to illegally take over GBC lands across the country did not start today and, therefore, they cannot hide behind this new law to execute their acts,” the union chairman said.

“Like any other state institution, the GBC, and for that matter the state broadcaster, has immediate, short and long-term plans for their current and non-current assets,” he added.

He assured the staff of the corporation that the union would use any possible means within the confines of the law to protect the company’s assets.

Already, he said the union had written an official letter to the Divisional Chairman of the Unionised Staff of the GRA to express their displeasure and also to warn the GRA to abort the move.

Additionally, he said it had also petition the National Media Commission and other stakeholder agencies to step into the matter.

Mr Kevor, therefore, urged the staff of GBC to remain resolute and continue to do their work to maintain the standard of the company to ensure that it maintained its position as a trusted voice of the country.

However, when the Daily Graphic contacted management source at the GBC, they declined to comment.