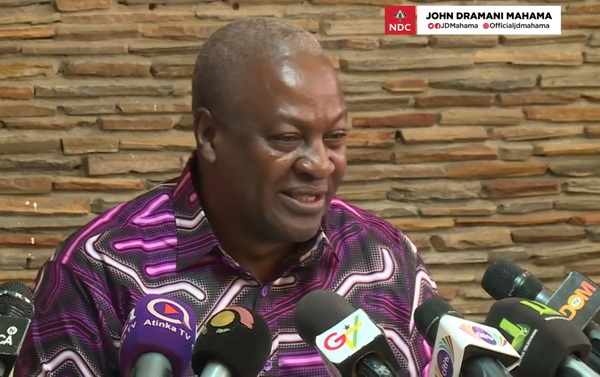 The Ghana Armed Forces (GAF) has denied claims that hirelings of the New Patriotic Party are undergoing a secret military training at Asutuare in the Greater Accra region ahead of the 2020 general elections.

Deputy Director of Public Relations of the GAF, Commander Andy La-Anyane was emphatic in an interview with Graphic Online that no such development has happened at the military training facility, challenging former President John Mahama and the National Democratic Congress who both say they have evidence to back their allegation, to produce same.

President Mahama first raised the concern in a meeting with executives of the Ghana Journalists Association last week, explaining that information available to him indicated those party men ('sinister force') undergoing the secret training were being prepared to wreck havoc during the elections, a claim also amplified by his party the NDC, which expressed worry their deployment would ostensibly be to disrupt the poll should things turn bad for the ruling party.

“We have in our possession pictures and other pieces of indisputable evidence about ongoing training of more of these thugs at Asutuare towards election 2020 as was revealed by President Mahama”, the NDC claimed in a statement it issued Tuesday.

Read also: NDC says it has evidence NPP is training thugs at Asutuare

But according to Commander La-Anyane, it is not possible that any such group would receive any training at the facility, explaining that the only group of people that have been trained there as recent as last week, were forestry guards from the Forestry Commission.

“There can be no such evidence from Asutuare because it not true. Whatever pictures or videos they claim to have cannot be from our facilities. Let them provide it. I can assure you it is not true”, said Commander La-Anyane.