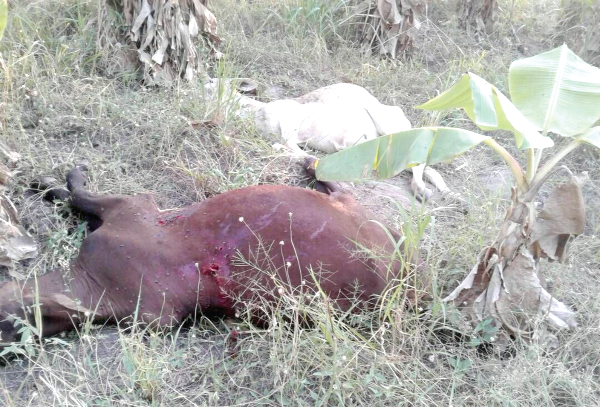 FLASHBACK: Some of the cattle that were shot and killed by the 'Operation Cowleg' team at Agogo Follow @Graphicgh

The leadership of the Fulani Community in Ghana is asking for compensation for their members who have lost more than 1,500 cattle that have been shot and killed by the police.

The group estimates the cost of the cattle their members have lost through skirmishes with the police since December last year to about GH¢6 million.

A spokesperson for the community, Sheikh Osuman Barry, made the claim at a press conference in Accra on Friday.

He called on President Nana Addo Dankwa Akufo-Addo to immediately halt the ongoing hostilities against the ethnic group.

A security taskforce, code-named ‘Operation Cowleg,  tasked to flush out nomadic herdsmen in Agogo in the Ashanti Region and other farming communities whose cattle had been destroying farmlands, has had a number of confrontations with the herdsmen.

The situation got to a head in Agogo about two weeks ago when two soldiers and a police officer were allegedly shot by the herdsmen.

The residents have been in disagreement with the herdsmen for some years now and called for soldiers to be sent to the area to clear them since the police lacked the resources to expel them.

However, the presence of the soldiers did not deter the herdsmen.

According to Sheikh Barry, they were reliably informed that some assailants from surrounding communities had exploited the chaotic situation created as a result of the joint military action.

“The operations also saw some Fulanis being attacked with some of them killed in the process while their properties were looted,” he alleged.

Sheikh Barry said he had heard allegations that herdsmen deliberately led their cattle to graze on people's farms but challenged those making such claims to produce evidence.

In a related development, the Ghana National Association of Cattle Farmers has condemned the shoot-to-kill approach adopted by the security operatives tasked to deal with the herdsmen menace.

Suggesting ways to deal with the issue, they say the state should take custody of straying cattle of recalcitrant members.

According to them, it was time the state developed more fodder banks and grazing centres for its members.