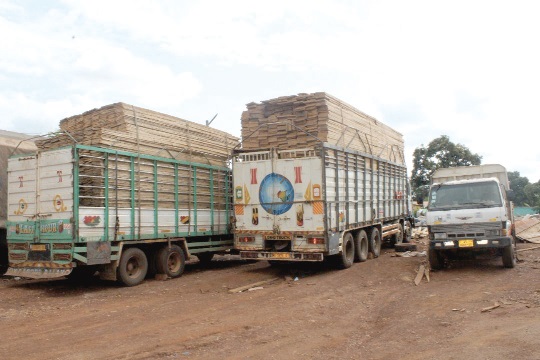 Some of the trucks loaded with illegal lumber
30.5k Shares

This seizure is part of an exercise to clamp down on illegalities in the timber industry, especially in the Goaso Forest Reserve.

Twenty-three of the trucks that were confiscated belonged to illegal chain saw operators, while the remaining 20 trucks were hired to evacuate lumber sawed at various illegal sawmills.

Altogether, the TIDD has seized more than 40,000 pieces of illegally sawn lumber and realised GH¢350,000 from the sale of some of the confiscated lumber.

Additionally, more than 500 timber logs have also been seized from the illegal timber operators.

Meanwhile, there are more timber logs yet to be evacuated from the various forest reserves and unregistered sawmills.

A military taskforce that was established to clamp down on illegal chain saw activities in the Goaso Forest Reserve has also arrested six persons for allegedly engaging in illegalities in the reserve.

The nine-day operation by the 15-member military taskforce, codenamed "Operation Halt", also seized about 50 lumbering machines used by the unregistered sawmills and destroyed structures put up by some of the illegal chainsaw operators.

The National FC Taskforce Coordinator, Mr George Osei, told the media that the prosecution of the arrested persons would begin soon to serve as a deterrent to others.

He said about 90 per cent of the sawmills in the Goaso Forest District were unregistered, saying: “It is devastating to see how the illegal operators have depleted the Goaso Forest Reserve.”

“The forest reserves are being depleted at an alarming rate. At the inception, the country had about 8.2 million hectares of forest cover, but as we speak now we have only about one million hectares left,” he said, explaining that the phenomenon contributed to climate change.