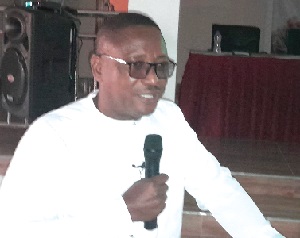 The National Programme Coordinator of the Ghana Agricultural Sector Investment Programme (GASIP), Klutse Kudomor, has advised farmers and agro-processors to produce food that contributed to the overall well-being of the consumer.

He said it was important for consumers to take nutritional foods to improve their health status and added that food no longer satisfied hunger or the need to eat with the right nutrition alone but contributed to the overall health being of the consumer.

Mr Kudomor gave the advice in an interview with the Daily Graphic at Koforidua in the Eastern Region at the climax of this year's National Farmers Day celebrations recently.

He stated that various projects under the Ministry of Food and Agriculture were contributing to the successes of the Planting for Food and Jobs (PFJ) and explained the need for farmers to take advantage of the raw material base created through the PFJ to develop sustainable businesses through value addition.

That situation, according to him, was what had been driving and shaping the entire agribusiness value chain and access to market, especially for value-added products.

He observed that companies in the food processing and manufacturing businesses had to produce food that ensured consumer well-being and should be regulated by both local and international standards.

Mr Kudumor also hinted that there was huge market locally and internationally for semi-processed products and emerging businesses in agro-processing stood to gain if they studied the specifications of industries and produced to meet them.

For example, he stated that key industries in the country were importing vegetable powder because they were unable to get the quality demands locally.

In other cases, he said, there were instances where pepper powder exported to Europe was rejected and destroyed, with its attendant financial consequences, because they fell short of food safety and quality standards.

Mr Kudumor said, although, Ghana had stepped up the production of raw materials needed by most industries, the quality and safety of those raw materials were vital to get access to industry markets.

According to him, maize production, for example, had moved from 1.8 million tonnes in 2016 to over 3.0 million tonnes in 2021, however, some industries, especially those that produced baby foods, were struggling with the reliability and safety of supply.

Mr Kudumor hinted that the situation presented a business opportunity for Ghanaians, especially those who studied post-harvest technology-related agricultural courses.

He urged the youth to take advantage of the situation and get insight into industry needs to develop high-value businesses that link farmers’ production and industry in a traceable manner.

According to Mr Kudomor, most activities of the projects under the ministry were centred on the end-to-end value chains of agribusinesses, creating raw material base for value addition and providing farmers with market access.

These are done through knowledge generation in the form of capacity building, provision of state-of-the-art technologies and enhancing access to high-quality production resources.

On GASIP, the Coordinator, stated that the programme played a very important role in MoFA because it targeted the small-holder farmers that produced more than 80 per cent of the staples consumed in Ghana.

Most importantly, GASIP had created 80 agribusinesses that offtake produce from these small-holder farmers for marketing and processing.

GASIP, he indicated, had also trained the youth in agro-processing and sponsored them to Brazil to learn about cassava processing.

Capacity building of women, Mr Kudumor pointed out, had also been provided in agro-processing and nutrition so as to contribute to enhanced livelihoods and incomes of their families.

He urged all actors in the agribusiness value chain to consider quality and safety as paramount in developing value addition products to enable them to get access to both local and international markets.