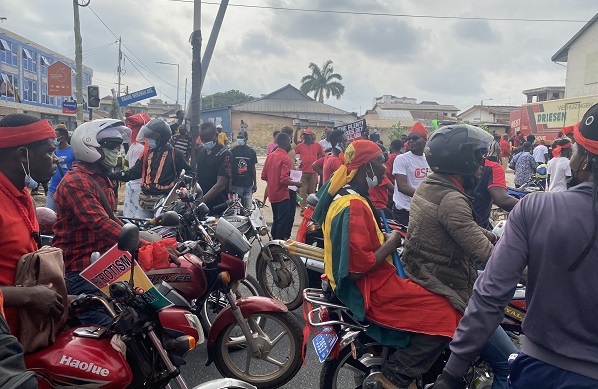 The much talked about protest, “Fix the Country”, came off yesterday, with hundreds of Ghanaians taking to some streets of Accra to demand accountability, good governance and better living conditions from the government.

The demonstrators, made up mainly of the youth and social media activists, held placards with inscriptions, including: ‘“We deserve better too, fix the country”, “We are suffering, we need jobs”, “Young people cannot pay rent, fix the country”, “Reduce fuel and gas prices”, “Where are the 88 hospitals Nana Addo?”, among many others.

A 67-year-old man who held a placard with the inscription: “No to revisionism. Nkrumah remains founder”, said he was not happy with the change of the Founders Day, which was celebrated every September 21 to mark the birthday of Dr Kwame Nkrumah to the present Founders’ Day marked every August 4 to celebrate the various founders of the country.

One of the youngest protesters, a 17-year-old boy, who spoke with the Daily Graphic, indicated that he had come from Nima to support his elder brothers who had no jobs and were sitting at home.

Many protesters had converged on the Kwame Nkrumah Interchange by 6 a.m., while others were bused from other locations to participate in the protest.

Mostly clad in red and black, some of them blew whistles and sirens, while others were seen speaking into microphones and mini speakers trying to organise and control the milling crowd.

The demonstrators started moving along their designated routes around 8 a.m. and walked through the Kwame Nkrumah Avenue towards the Farisco Traffic Lights, through the TUC Traffic Intersection to the Economic and Organised Crime Office (EOCO) at Accra Central and ended at the Black Star Square.

The protesters sang revolutionary and patriotic songs, such as “Arise Ghana Youth”, while others vented their frustrations on the government with insinuations.

There was heavy security presence, mainly personnel of the Crowd Control Unit and the Formed Police Unit (FPU) of the Police Service, who were seen with water cannons and other crowd control vehicles and accoutrements stationed at vantage points to ensure that the protesters used the prescribed routes.

Drama ensued when a section of the protesters wanted to use the Graphic Road when they got to the Farisco Traffic Intersection, but the police prevented them from doing so.

That temporarily created a chaotic scene. However, the strong and focused security presence averted any unfortunate incident and calm was restored.
Generally, the exercise was peaceful and ended uneventfully at the Black Star Square some minutes past noon.

Addressing the crowd at the Black Star Square, one of the conveners, Mr Ernesto Yeboah, said the demonstration was only a tip of the iceberg, and that more action would follow if the government refused to address their plight.

According to him, the government had oppressed the youth of the country for too long and it was time they also proved that “power belongs to the people”.
“Nkrumah said the secret of life is to have no fear and that is why we all must have no fear. We need to fight for what belongs to us without any fear and that is the only way the government will listen to us,” Mr Yeboah said.

After the protest, he disclosed that they were going to sign a petition for the 1992 Constitution to be abolished to give way for a completely new one.
According to him, it had done the country more evil than good “and it is about time a new constitution was developed to ensure a better Ghana”.

Some well-known participants were Black Rasta and Captain Smart, both radio presenters, and Avram Ben Moshe, a social media activist.

The ‘Fix the Country’ protest was birthed when some social media activists took to the various social media platforms to express their grievances over poor living conditions across the country, with the hashtag #FixtheCountry, and called out the government to turn around the situation.

Similar calls followed with intensity, putting pressure on the government to convene a meeting with some of the leaders who started the agitation.

In spite of the meeting with senior government officials and the promise to change the situation, people were not convinced by the promises and continued to share their frustrations and calls for the government to fix the country.

They initially planned to hit the streets to protest on March 9, but the police prevented that by mounting a heavy security presence at the Black Star Square where the protesters had planned to gather.

The protest became successful after an Accra High Court had dismissed an application by the police seeking to halt the protest, using COVID-19 restrictions as an excuse.