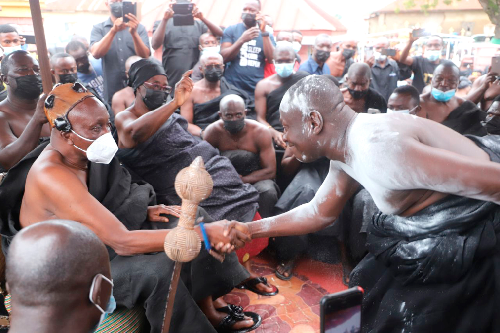 The rich Asante tradition was on display at the forecourt of the Juaben Palace in the Ashanti Region last week Thursday (Awukudae Yawuoda), as Juaben enstooled its first ever Akyempimhene in the traditional area’s history.

During the ceremony which had to be delayed because of early morning showers, heads of all the clans of Juaben, as tradition demanded, resplendent in their all-black attires, were given an opportunity to condemn or accept the validation of the new candidate before he was approved and made to swear allegiance to the Juabenhene in the presence of the Juabenhemaa, Nana Akosua Akyiamaa II and the people of Juaben.

The Akyempim Stool toes the line of “Ahenema Dwa” or preferably “Mmamadwa", a stool reserved for sons (and grandsons) of chiefs. This is because inheritance is paternal or through the father.

During the enstoolment, many of the sub-chiefs who were there to witness the historic occasion recalled the Akyempimhene’s frankness and effective contributions towards creating employment opportunities for the youth and the people of Juaben, especially in the area of agriculture.

Present at the all-black-attire ceremony were the Municipal Chief Executive of Juaben, Mr Kodjo Ansah-Jem and a former National Chairman of the New Patriotic Party, Mr Peter Mac Manu.

Speaking at the ceremony, the Chief of Juaben, Nana Otuo Siriboe II, said the heavy rains that morning was for a good purpose, saying "this morning’s rains is nothing but showers of blessings."

"This early morning’s rains have attested to the fact that God and for that matter our ancestors have accepted the enstoolment of our Akyempimhene in good faith," he added.

The Juabenhene, who is also the Chairman of Council of State, expressed his gratitude to the sub-chiefs and the people of the traditional area for the confidence reposed in Oheneba Yaw and told the new Akempimene not to disappoint them.

For his part, Oheneba Yaw Siriboe I thanked the Juabenhene for the honour done him and assured him that he would take his advice to help him play his chieftaincy role effectively.

He also thanked the queen mother and kingmakers, as well as other chiefs in the area for their collaboration and expressed appreciation to the Juabenhene for his guidance in the formative stages of his life.

Oheneba Yaw Sarpong Siriboe I, holds a Master’s Degree in Supply Chain Management from the Kwame Nkrumah University of Science and Technology(KNUST).

He is currently the Supply Chain Manager for Juaben Oil Mills and the CEO of Siriboe Farms.

In 2019, he was adjudged the first runner-up in the Best Farmer category during the National Farmers Awards, having won the Best Palm Fruit Farmer in the Ashanti Region in 2015.

He serves on a number of boards including the Juaben Rural Bank, the Centre for Scientific and Industrial Research-Oil Palm Research Institute (CSIR-OPRI) and a member of the Business Advisory Committee, Business Resource Center(BRC) at the Sekyere District Assembly. He is married to a wife and has four children.